Easthampton Planning Board discusses plan for development on Mount Tom 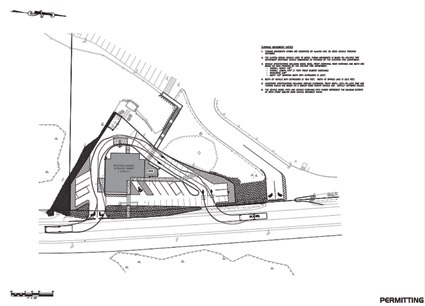 HOLYOKE – The Holyoke Planning Board’s public hearing on the proposed development of a Dunkin’ and Delaney’s Market on the property of the Log Cabin will continue on Jan. 26, and while the Easthampton Planning Board is watching with interest, they do not plan to take an official position on the matter at this time.

A revised site plan proposal calls for a “hybrid” 2,500-square-foot building that would include a Dunkin’ drive-thru and a Delaney’s Market in front of the Log Cabin at 500 Easthampton Rd., Rob Levesque of R Levesque Associates explained at the Holyoke Planning Board’s Jan. 12 meeting.

Both establishments would occupy the same structure in the location of the existing Mt. Joe to Go drive-thru. As well as seeking approval of the site plan, the applicants are in need of four special permits from the Planning Board related to shared parking, multiple principal structures, signage and fencing.

In addition to the hearing, which was continued in part because some of the information was not available to the Holyoke Planning Board until shortly before the Jan. 12 meeting, board Secretary Mimi Panitch also suggested a site visit should be conducted as part of their review.

Levesque said his firm, along with Peter Rosskothen, owner of the Log Cabin, Delaney House, Delaney’s Market and D. Hotel and Suites, had been working with Salmar Realty’s Peter Martins for some time on the plans.

Rosskothen launched Delaney’s Market, a brick-and-mortar retail chain specializing in ready-to-heat take-home meals, in 2016 with its first store located in Longmeadow. With initial success, additional locations were established in downtown Springfield, Westfield and Wilbraham, though the Springfield site has since closed.

“Mr. Martins and Mr. Rosskothen thought it would make a lot of sense, because of the symbiotic relationship between the two uses – one being a coffee/fast-casual restaurant and the other being a takeout use … When Dunkin’s busy, [Delaney’s Market] are not and vice versa,” Levesque said, adding events at the Log Cabin normally would also not impact or be impacted by the operations of the proposed businesses. “Generally speaking, the uses all kind of blend together nicely.”

The Dunkin’ would offer primarily drive-thru service with two 10-foot one-way lanes while Delaney’s Market’s model would feature walk-in retail with no drive-thru available. Pedestrian access would be built to connect the lower parking lot to the upper lot adjacent to the Log Cabin building, as well as a crosswalk in the area of the drive-thru, and a small patio. Thirteen total parking spaces were proposed including six in front of the building as well as three employee spaces.

“The available stacking is anywhere from five to seven cars, which is well within what we’ve found we’re going to need,” he said.

The building itself, Levesque said, would look different than a typical Dunkin’ with a more “muted color scheme” and “modest” signage in order to remain consistent with the look of the Log Cabin.

Board member Kate Kruckemeyer voiced concerns regarding traffic, stating in spite of what data on the store at Hampden and Pleasant streets might say, she has seen excess queueing and asked for potential alternatives to combat similar issues on the busy Route 141 roadway. “I’m intensely concerned about what that does on the top of the mountain where there’s not much room for error there,” she said.

Levesque said City Engineer Robert Peirent was also reviewing the traffic proposal and data and acknowledged there could be changes.

Issues of conservation were also brought up by Panitch, to which Levesque noted they were working with the Conservation Commission and had received a letter of approval from the U.S. Fish and Wildlife Services Endangered Species Program. He said they were also working on a conservation management permit for the property as well.

This is the second proposed Dunkin’ development project with potential impacts on the city of Easthampton. The Planning Board is currently in the midst of discussions with Westfield’s American Dream Realty LLC regarding a proposed restaurant near the intersection of Route 5 and East Street. The public hearing on that proposal, which includes the potential addition of a traffic signal at the intersection, is expected to continue on March 2.

While not directly involved in the decision-making process for the Holyoke application, the Easthampton Planning Board took the opportunity to hear from the public during its Jan. 5 meeting after receiving an invitation for input from the Holyoke Planning Board. Holyoke was legally obligated to notify Easthampton of the project as an abutter.

Board Chair Jesse Belcher-Timme explained that in most cases, the board would not attempt to duplicate another board’s efforts, but given the nature and scope of the project, he was interested in hearing from the public.

“My general thought all along is that those boards will receive public comment and address all of the concerns that we would, but I don’t want to miss a chance – certainly, for something like this, which is at the top of Mount Tom and I think will have a big impact on Easthampton – to see if they have questions and at least raise some concerns,” he said.

Belcher-Timme later opined, “The only value we could offer by sending a letter is if there is something that is sort of unique to the Easthampton side of things, which, as I said, I think good, bad or indifferent, it is going to hit Easthampton the same way it hits Holyoke – that it’s going to add the same issues with congestion and traffic and all of that and commercialization at the top of Mount Tom and any number of things like that. So, I’m not sure we would add much as a board to that discussion.”

Panitch, speaking on her own behalf, appeared before the Easthampton Planning Board to discuss the project and explained, “From our point of view, and certainly from mine, I would be concerned about whatever issues might specifically affect Easthampton that we wouldn’t necessarily know about.” Panich mentioned lighting on the mountain as a potential issue that might have more impact on Easthampton residents than those in Holyoke.

“We are going to be paying meticulous attention to the traffic because that’s a big deal,” she said. “We don’t have jurisdiction to say, ‘We just don’t want commercialization up there,’ but there are obvious issues about the aesthetics and about the wildlife, and to the extent that you know any of it, it’s helpful and we certainly would welcome anyone from Easthampton who would like to participate in our proceedings.”

Panich also noted that in addition to the Planning Board process, the Holyoke City Council would have to approve a special permit for the drive-thru. A separate set of hearings will take place on that portion of the project with the first hearing taking place before the City Council’s Committee on Development and Governmental Relations on Jan. 25.

“We’ll try to keep you all notified on all of these dates – I’m sure there are going to be rather a lot of them – but certainly to the extent you all want to chime in, you are welcome,” she said.

Board member James Zarvis echoed Belcher-Timme’s assessment that the Holyoke Planning Board’s concerns would in many ways mirror Easthampton’s, especially in regards to traffic, noting the same discussions have occurred in the approval process for the East Street Dunkin’ proposal.
Board member Harry Schumann pointed out the Mt. Joe to Go currently at that location has operated for years and the location would not have any impact on residential neighborhoods.

“You’re not impacting any neighborhoods with traffic. The traffic is what it is,” he said. “It’s not like down on East Street in Easthampton where you have all the homeowners down there; there’s no homeowners up there.”

Easthampton resident Nina Levinson told the board while she didn’t have any technical or planning-specific concerns, she felt there wasn’t a demonstrable need for another Dunkin’, especially at that location and also noted there were homeowners within a mile of the proposed site.

She also asked if the traffic study would assess impacts on Easthampton as well. Easthampton’s Assistant Planner Curt Weimann, a former employee of the Holyoke Planning Department, explained Holyoke’s ordinances require a study of traffic in both directions.