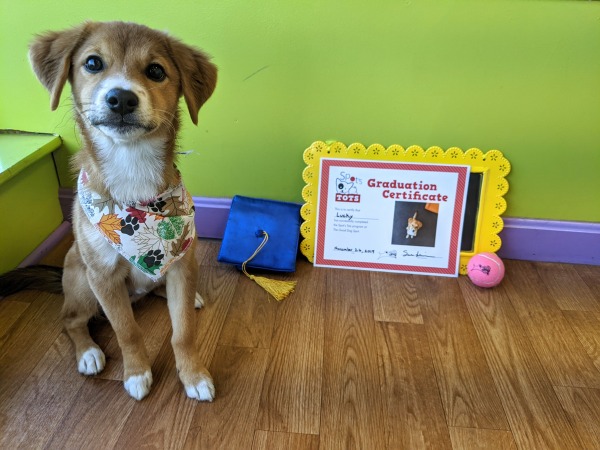 CHICOPEE – Good Dog Spot, a doggy daycare and grooming facility is now welcoming the smallest of dogs by bringing their Spots Tots program to their Chicopee location.

The facility which offers boarding, grooming and dog daycare services at their Northampton and Chicopee locations for years is now bringing Hampden County residents the option to enroll their puppies in a unique program.

Owner of the Good Dog Spot, Elizabeth Staples, said the Spots Tots was an idea she’d had in her head for years. “I thought, there’s got to be something more than what we’re doing for puppies,” she told Reminder Publishing.

Staples said the program was introduced at their Northampton location around two years ago and has proven to be successful. That success, she said, led to her to bring the program to the Chicopee location at 35 C. North Chicopee St.

“Seeing the success of it in Northampton, they see it on the web and it’s a little bit far for them to travel. So it made so much sense in Northampton, we didn’t want to be doing a disservice to our Chicopee clients,” she explained.

The program began in Chicopee on Nov. 15 and already has half a dozen puppies in it. Staples said people who are bringing a puppy home soon have also called asking about availability.

“It’s been great there, you get the puppy and they’re too young for daycare,” Staples told Reminder Publishing. “We try to accommodate them, you can’t take off [from work] for the next three months.”

Puppies in the program range from the age of 10 weeks old to 16 weeks old. Staples said in order for puppies to be included in the program, they must have been in their new homes for at least two weeks.

While the puppies may be too young to have completed all their vaccines Staples said they rely on the pet’s vet to make sure their health is okay before they join the program. “They need to have a clean bill of health from the vet,” she said. “We really just rely on vets to make sure they feel they’re healthy enough. Once they hit 16 weeks they need to have a current rabies as per state regulations.”

Staples said during the five-day program the puppies learn fundamental skills such as socialization, exposing to grooming, being introduced to other dogs and learning how to play appropriately.

“It keeps them separated, but deals with their development,” she said. “The first few months are just so critical.” The puppies are also exposed to children and take field trips to local stores. Staples joked that her children, who often come in to play with the puppies, “take their job very seriously.”

She said while all the puppies play in a group, they also get one-on-one time, frequent bathroom breaks and frequent rest breaks. While Staples described it as “super fun” she said, “it’s like doing a puzzle” trying to figure out each puppy’s needs. “There’s a lot of rotating, we just try to make it work,” she explained.

She said a lot of people put their puppies through the program, not just to keep them occupied during the day, but also to give them a good foundation of skills.

“What we’ve seen is we have a much more confident dog when they join the full daycare program,” she explained. “They want to make sure their dog has a basic foundation from grooming to at the dog park. It sets them up for the ‘been there done that’ so they don’t have to be scared.”

Spots Tots offers both half and full day passes. The program, she explained, only runs in the morning but if the puppy is signed up for the full day program they spend the second half of the day doing a variety of activities. She noted that while full-day classes are offered at the Northampton location, the Chicopee location wouldn’t offer full-day classes until January as they’re still “tweaking things.”

“They’re introduced into what is best or safest for them in the afternoon,” she said. “A big puppy might be playing with the smaller dogs. Sometimes it just means day boarding, or getting exposed to other areas of the business.”

Program passes are purchased in a five-day package, but Staples said one wouldn’t have to bring their puppy five days in a row. Five full day passes costs $205, which ends up costing $41 a day. Five half-day passes costs $165, which costs $33 a day. Both participants of the half and full day programs get plenty of exercise and stimulation. “No one ever complains their dog goes home with too much energy,” she said.

Often puppies will go through the program two times, but when they hit 16-weeks-old they “look at where they’re at and graduate them into full time daycare.” She explained, “We stage their grad pictures and they get a little cookie.” Staples said she is excited to have the program in place before the holidays as they always experience a higher volume of young dogs.

If you’re interested in enrolling your puppy in Spots Tots, Staples said the best thing to do is call them at 534-1333. “We do have a lot of questions, we don’t want people to just book it online,” she explained.