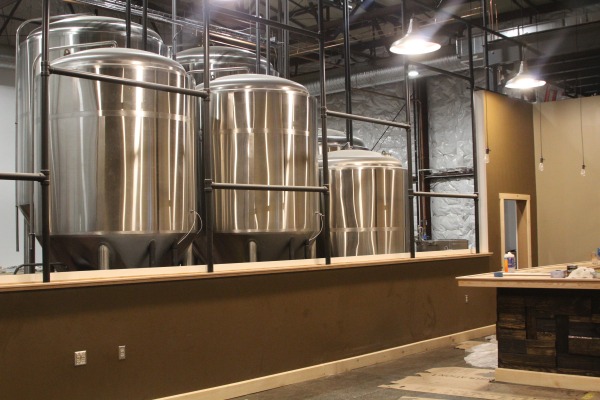 The fermentation tanks can beseen in the tap room of Leadfoot Brewing.
Reminder Publishing photo by G. Michael Dobbs

While much of the work to transform a former bottle warehouse on the site of the former Hampden Brewery – last used by Piels in 1975 – into a modern brewery has been done, the partners still have some tasks to complete.

The tap room with a distinctive recycled wood bar – the bar surface is a re-purposed bowling lane – is heading to toward completion. The area has one open wall with a dramatic view of the huge fermentation tanks.

The tap room will have 15 to 18 seats at the bar and several tables, Thibodeau said.

An 86-inch flatscreen is resting against a wall waiting for installation. Thibodeau said the idea of the tap room is not to create another sports bar, but “a social gathering spot.” He predicted the TV would be on when the tap room is open, but will play with the sound off.

The tap room will also serve non-alcoholic beverages made on premises. Thibodeau said they will offer a nitrogen cold brew coffee, which he said “pours like a Guiness...it tastes fantastic.”

He is also trying to decide if the brewery will make its own root beer or ginger ale for the tap room.

Walking into the cooler where the kegs of beer will rest that will be used for the tap room, he said it will be kept at 44 degrees. That temperature is “good for the flavor profiles that are important for us,” he noted.

He walked Reminder Publishing, which last visited the site in August, through the facility showing the area at which grain is milled to start the brewing process to the various tanks and stages of preparation before the liquid heads into fermentation tanks and then to the conditioner for carbonation to happen.

The partners are using state of the art technology to brew their beers and to control waste water, Thibodeau explained.

The partners have ordered 350 kegs for their production and will offer the beer in 32-once crawler cans and growler bottles.

Thibodeau also noted that he and Randall have been able to buy a collection of historic artifacts from the time the Willamansett location was home to Hampden Ale. These included a hand-written recipe for a beer produced by Hampden. Thibodeau said he intends to create a beer from that recipe with some modern alterations.

Looking around the brewery, Thibodeau said he and Randall are “really thrilled about the way this is coming out.”

He noted that less than a year ago the location was “a barren warehouse with three lights.”

Soon it will be a business returning the brewing business to Chicopee at the location it once flourished.