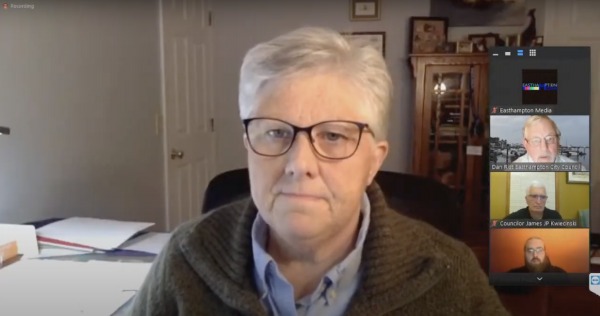 EASTHAMPTON – At its Nov. 3 meeting, the Easthampton City Council discussed moving $97,000 of the Cannabis Stabilization Fund to the City Planner budget.

“As we all know the Planning Department works feverishly, licensing and dealing with our cannabis retail. This is a way to supplement their budget so that salaries and etc. can be funded through Cannabis Stabilization rather than the general fund,” said council member Dan Rist.

City Planner Jeff Bagg explained the matter in further detail. “There are three parts to this request,” said Bagg. “The first is a request for $34,000 to fund a portion of the city planner’s salary. I’m also asking for $60,000 for the Planning Department to have access to for consulting purposes, this would be for cannabis-related projects and general projects. The last is a $3,000 request to cover the entire city’s participation in the Pioneer Valley Planning Commission.”

One of these general projects is the intersection at Parsons and Ferry St. “It’s a really problematic intersection,” said Bagg. The cost of the design and investigation alone would be $46,000. “We are trying to advance some pedestrian safety improvements for the new school,” he said.

Councilor Erica Flood, who lives on Parsons St., agreed that something needed to be done. “The sidewalk is crooked, cars are coming, it’s really not only dangerous for pedestrians during the day because of the traffic, but at night when the traffic calms down there are very little street lights,” she began. “This infrastructure really needs a lot of work to make it safe for everybody in this area.”

Rist made a motion for the council to approve the supplemental appropriation in the amount of $97,000 from the Cannabis Stabilization to the City Planner. The motion passed unanimously.

Rist made the motion to continue the hearing, explaining the continuation was at the request of Assessor Randy Austin.

“He wants to give us a lot of the values they’re working on. Although that’s not something we deal with – we deal with the classification – he requested that he wanted to have a good session with us, so at the [Finance Committee meeting], we decided to wait on that.”

Rist added the Finance Committee would discuss the tax classification at its Nov. 10 meeting. The hearing was continued to the Nov. 17 meeting.

The council also discussed an imminent change in the platform through which its virtual meetings take place. City Council President Peg Conniff said the council was “at a crossroads” with a shift from Zoom to Google Meets and she hoped to have a discussion between councilors with the city’s IT Department to address their comfort level and necessary training.

“We’re going to start using Google Meets exclusively in the next probably month and I want to make sure you’re all comfortable,”?she said. “We’re going to be working through that with that IT group  and then we will be explaining how you can use your own individual ID or the City Council ID that we are setting up as a stopgap in case anyone has any concerns.”

Councilor Thomas Peake, who said he has used Google Meets in the past, said the platform is easy to use but agreed training would be useful due to a different interface.

“It’s a pretty similar thing but it’s just a little bit different and there might be a learning curve that might take 10 minutes to figure out. But that learning curve you might not want to do during a council meeting,”?he said.

Flood asked how the new platform would impact the public’s ability to access and participate in remote meetings. Conniff said unlike Zoom, which required downloading an application or having the program available, Google Meets would be more accessible.

“Google Meets is not that way. You just click the link and you’re there,”?she said. “I think it will actually be easier for a lot of folks in that regard.”

She later added, “The advantage to Google Meets, once we get the security figured out where everyone’s account has the same settings for security ... by having multiple accounts, we won’t run into what we’ve run into over the last two years, which is conflicting meetings happening at the same time. Because we all have our own Google Meets account, we could set up meetings that run concurrently with different IDs, so that is a positive and we’ll explore that as well.”

Flood also suggested recording the training and posting it on Easthampton Media so the public could train themselves on how to use Google Meets,  a concept to  which Conniff was receptive.

“My concern is the training would be from our perspective and I would hope that wouldn’t confuse people who are participating in a meeting,” Conniff said. “We may have to do maybe a little one-off to show people how it looks when they’re participating but it’s not a bad idea and we can talk to [IT Director Karin Moyano Camihort] and [computer technician Noah DuBoff].”

Flood also offered to develop an infomercial as a member of Easthampton Media to inform residents.

Rist said he, Conniff and Councilor Homar Gomez had a trial session with Google Meets and said it was easily learned and councilors should be able to pick it up with IT’s assistance in a 10-minute session.

“It is actually easier and my best advantage is I think it’s more secure,” he said. “There are some things we need to work out like the chat room, which we are working to disable – we don’t want that – and things like that.”

However, he recommended postponing the implementation of Google Meets in order to have Moyano Camihort and DuBoff attend the next meeting to provide an overview. He also suggested councilors reach out to the IT Department to set up a training so they can share their thoughts at the Nov. 17 meeting.

Conniff added, “Let’s hope that this isn’t for many more months and we’re back in City Council together at some point, but for now we have to assume it’s going to go at least through one or two, possibly three months into the new year.