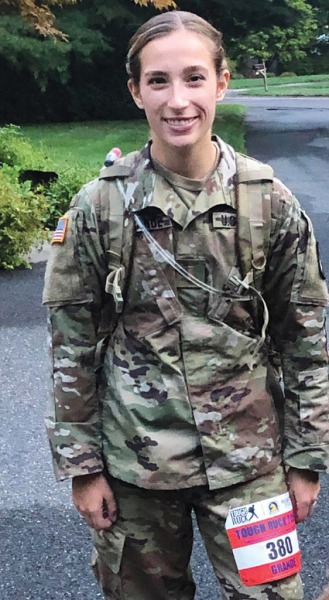 East Longmeadow resident Payton Grande recently participated in the 8th Annual Military Friend’s Foundation Tough Ruck event. She ran 26.2 miles carrying a 15 to 35 pound rucksack on her back in honor of the fallen military and first responders who sacrificed their lives on 9/11.
Reminder Publishing submitted photo

EAST LONGMEADOW – East Longmeadow native and Field Artillery Officer Payton Grande participated in the 8th annual Military Friend’s Foundation Tough Ruck event. She ran 26.2 miles carrying 15-35 pound rucksack on her back in honor of the fallen military and first responders who sacrificed their lives on 9/11.

“This is my second Tough Ruck event,” Grande shared with Reminder Publishing. “I did it last year when I was a junior in college. It's an event that my ROTC program had done every year and it was something I was super excited to do.”

Grande is one of the first female Field Artillery Officers coming out of the state of Rhode Island. She started thinking about the army in high school, Grande said, but knew she wanted to finish college first.

Once she learned about the Reserve Officers’ Training Corps (ROTC) during her sophomore year in college, Grande joined right away. She then drilled with the National Guard her junior year of college, and was able to simultaneously work on her degree while enrolled in the ROTC.

As Grande explained, “I gained a lot of leadership experience, physical training and tactical knowledge. My favorite part so far has been drilling with the Rhode Island National Guard’s Field Artillery Battalion. I’ve learned so much in the two years that I drilled with them and I feel more prepared now going in my new career because of that experience.”

Grande recently graduated from the University of Rhode Island with a Bachelor of Science in Health Studies degree. She’ll be heading to Oklahoma for her basic officer leader course.

Tough Ruck is an event put on once a year where participants raise money for military families in Massachusetts through the event’s official charity Military Friends’ Foundation. A nonprofit organization offering financial assistance and support services to families of the Fallen.

The term “rucking” is when you’re walking with a weighted pack on your back for a set distance.

Due to COVID-19, they did a virtual version of the event. Participants could choose to do their marathon distance from Sept. 11 to the 13 in a small group or alone. This year, the foundation raised $695,000.

As part of her training, Grande did six months of rucking and long-distance running. Along with weight lifting to keep her back muscle, hamstring and quads strong.

Not only was Grande rucking for the military, she was also rucking for fallen Officer Kevin Ambrose of the Springfield Police Department. Ambrose was a colleague and good friend of Grande’s father Steven. Ambrose was killed in the line of duty responding to a domestic disturbance in 2012.

Grande had a ribbon on her pack with Ambrose’s name on it as a reminder throughout the 26.2 miles. She emotionally described it as a way to “keep her present” and going even when it got tough. She explained she wanted to finish the marathon for him and those that lost their lives on 9/11.

“Anyone that serves their community in the way that he did means so much to me,” Grande replied. “It’s something that I would like to embody in my own career. What I’ve learned is that I can do the most unimaginable and impossible task. That's also one of the reasons why I joined the army. I wanted to prove to myself that I can accomplish the hard challenges in life.”

Grande's advice to young women considering to join the army is that in the coming years they don’t have to make that hesitation to ask themselves if they are ready solely because of their gender.

She concluded, “You don’t have to sacrifice your femininity or your sense of self because you think it makes you more fit for the job. Your merit, leadership qualities, and physicality determine your ability to do well, not your gender.”