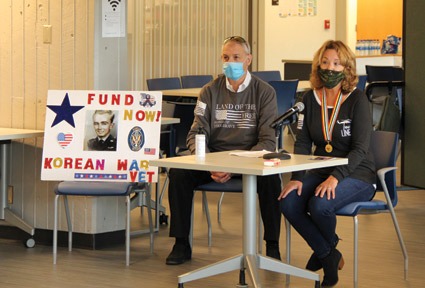 ­HOLYOKE –  Family and loved ones of veterans who died during a COVID-19 outbreak at the Holyoke Soldiers’ Home had the chance to speak publicly about what they and their loved ones went through during two events recently.

The outbreak in March and early April, when the pandemic first hit the Western Massachusetts region, resulted in the death of 76 veterans at the home, the firing of former Superintendent Bennett Walsh, and the eventual criminal indictment of both Walsh and former Medical Examiner David Clinton.

Families and loved ones of veterans who were at the Home during the outbreak were invited to two opportunities to share their experiences recently in front of the state’s legislative Holyoke Soldiers’ Home Oversight Committee. While both events took place at the Holyoke Community College, the first on Oct. 20 invited families to share their experience in front of the committee in person. The second event, on Oct. 22, had committee members in-person at the college while families participated virtually. Both events were livestreamed for the public to watch.

The hearing on Oct. 20 began with remarks from several state and local officials, including Sen. John Velis. Velis said while he would “never be able to truly understand the pain these families are enduring,” he was inspired by their strength, courage and determination to seek justice for their loved ones. He said deaths of the veterans affected many. “We all want to see a better Home, we all want to see better care for our veterans,” he said.

Rep. Aaron Vega also gave a brief statement and said while sharing the stories and experiences the veterans endured would be painful, it needed to be done for everyone to heal. “Sharing these stories will be difficult, but it’s part of the healing process,” he said.

Vega added that it was also needed so they would be able to address current and ongoing issues in the Home. “To make sure we have a Home that’s not just state of the art, but to address the issues being brought up, not just from this tragedy, but for long standing issues,” he said. “[This is the] first step of many, but we’re going to make sure we’re going to provide not just a home, but a place where veterans can come and be safe.”

Susan Kenney was the first to share her experience. Kenney was emotional, struggling to speak at times through tears, as she recounted the experience of her father, Charles Lowell. Kenney said her father ultimately passed of COVID-19 on April 15, but she first heard of the outbreak on the news.

She went on to describe her fear and anxiety as she tried to reach out to the Home to find out about the condition of her father’s health and received no communication. Even after being directed to a call command center, she said she, along with other family members including her mother, didn’t hear from anyone at the Home for over 30 hours.

“The numbers kept rising and I still didn’t know if my father was dead or alive,” she said through tears.

This, she said, prompted her to take extreme action. “I wrote on all the windows of my car ‘Is my father dead or alive?’ and drove to the Soldiers’ Home,” she told the committee. On her way to the Home, she said her mother found out Lowell had in fact tested positive, but her experience with the Home “didn’t necessarily get better after that.”

She gave detailed encounters of her interactions with certified nursing assistants (CNA) leading up to the outbreak at the home and said she had witnessed, on several occasions, one CNA kissing veterans. “The CNA that I had previously complained about kissing the veterans, I saw her on March 4. I saw her kiss another veteran that day,” Kenney said. She added that she saw the CNA “arm and arm with another veteran,” making jokes about the virus.

“You can give compassionate care without kisses,” she said. Additionally, Kenney said on one particular day in March, there was not a single box of gloves in her father’s room and during all of her visits, she “never saw a table or chair being wiped down, ever.”

“On March 11, there were no gloves in my father’s room where there were usually three boxes. My father didn’t have the ability to wash his own hands, I wonder sometimes if that was ever done or tended to,” she said.

Kenney ended her remarks by urging legislators to fix the ongoing issues and ensure a tragedy such as this would never take place again. “It can’t happen again, we need to fix it, to remedy it somehow and make sure they have all the equipment and everything they need to provide the best care,” she said.

Cheryl Turgeon and her husband, John, of East Longmeadow also shared their experience during the first hearing. The pair entered the room carrying a poster that bore her father, Dennis’, military photo, wore shirts expressing their support of the military and her father’s Peace Medal hung around Cheryl’s neck. She gave an overview of how her father came to join the National Guard at just 17 and a half years old with his older brother. She said Dennis served in the Korean War and then went on to serve in the Air Force where he later earned his Peace Medal.

She said Dennis had recently celebrated his 90th birthday, and “thrived at the Home.” Cheryl said he first became sick over the weekend of March 28. “I was shocked when I FaceTimed him over the weekend to see he was lethargic, could barely talk and was feverish,” she said.

She said on March 31, shortly after the National Guard was deployed to the Home, her father was sent to the hospital where he stayed on the COVID-19 floor for six days. While he tested negative for the virus, she said, doctors “feel he was a false negative.” Cheryl said despite being told to prepare for the end of her father’s life and that “they wouldn’t have a ventilator available for him if he needed one,” her father recovered and returned to the Home.

However, she said upon returning to the Home, her father developed other, serious health problems. “[He] was left in a bed for weeks and weeks and weeks, until his toes turned black and he had pressure ulcers,” she told the committee as she held up photos of her father and his health complications during this time.

She emphasized the need for communication to families, and said the return to basic services in the Home had been incredibly slow moving. “More consideration needs to be given to surviving veterans in this home, basic return to service is slow. They haven’t had dental exams, eye exams,” she said. “I’m tired of listening to ‘I hear you,’ I need clear concrete answers. They’re not numbers to us, they’re people who love their families, miss their families.”

In the second day of testimony from family members, held virtually, Donna DiPalma said her father, who lived at the home was one of the veterans who ultimately died due to COVID-19. She said during his final days, she was allowed to visit him, despite his positive test, but wasn’t expecting to be in a room with two additional veterans who were also COVID-19 positive.

“My father trusted me with his life, I put him in a place I thought he was getting the best care, and I guess that will be with me forever,” she said. DiPalma added that she found it odd that “nobody mentioned COVID on his death certificate.”

Erin Schadel whose father lived in the Home said she first heard of the outbreak via a social media post from a staff member. She said her father served as a firefighter for 32 years, and she didn’t feel as though he was being given the care he put into his community for all those years. “My father served his country and then his community as a firefighter for 32 years. It feels as though he’s trapped in a building the governor is letting burn,” she said. “We, as his family, can only pray the flames don’t reach him.”

She said in the weeks following the outbreak she received little to no communication from the Home, and the only communication she’d received was an email from Sen. Eric Lesser. “All information came from the media,” she said. At one point, she said her brother became so frustrated that she asked “Are you just waiting for my dad to die?”

“The response was ‘I don’t know what to tell you,’” she said.

Schadel said when she finally did receive communication from the Home, she was told her father was among those being moved to the Holyoke Medical Center. However, a week later she found her father was still at the Home and had never been moved as she’d been told. Shortly after this, she said, is when her father tested positive for COVID-19. After being moved to several different floors, she said he landed on the second floor.

“My father recovered, but was never moved from the second floor where there are still active cases,” she said. Schadel said recently when she asked about a plan to move him from the second floor, she was told there was no plan in place to move residents who tested negative off of the floor. In the meantime, she said her father begged her to keep him off the fourth floor.

“[He] continually stated he wouldn’t go back to the fourth floor, and begged me over and over again not to send me back there,” she said. Schadel also described how on several video calls her father was wearing clothing items that were not his. She said at one point during a call when a nurse was describing a photo of her mother on her father’s nightstand, she found that the photo was not of her mother, but instead a woman she didn’t recognize. She described how over the weeks her father’s hearing aids went missing, as did his glasses. When she inquired about them, so she could have both repaired, she was initially told they were being repaired. However, when she pressed further after weeks of him not having either, she was told they had gone missing.

“You could have asked the families and we would have told you, they were not prepared,” she said. Additionally, Schadel said she wished Walsh “would have fought half as hard to get enough PPE as he did to get his job back.”