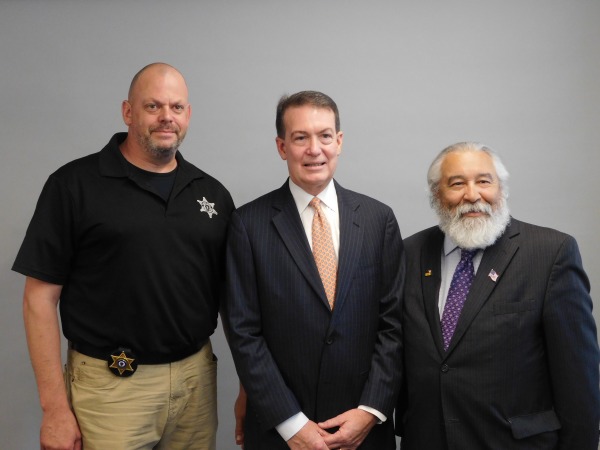 SPRINGFIELD – A lawyer, a community activist and “the bike guy”  – three individuals who, in the words of Pynchon Trustee Chair Scott Whitney, “Show us what exceptional community service is” – were named as recipients of the Order of William Pynchon for 2019.

The announcement, naming  Atty. Charles R. Casartello, Jr., “Bike Guy” Robert Charland and local community activist Heriberto Flores as Pynchon Medal recipients, took place in the conference room of the new Union Station on June 26. Members of the Pynchon Trustees Teresa Utt of Andrew Associates, Barbara Perry of The Reminder and Whitney, of Taxi Colectivo, presented the candidates to an audience that included friends, family members, supporters and members of the press. The three men will receive the Pynchon Medal during a ceremony at the Log Cabin in Holyoke on Oct. 10. Tickets, and more details about the evening, are available at www.adclubwm.org.

Conferred annually since 1915 by the Advertising Club of Western Massachusetts, the Order of William Pynchon and the Pynchon Medal recognize individuals who have, according to a release about the awards, “rendered distinguished service to the community.”  Selected by unanimous decision by the Pynchon Trustees, which in 2019 include David Cecchi and Brenda McGiverin in addition to Utt, Whitney and Perry, recipients are chosen because they exemplify the lifelong ideals of Springfield’s founder, William Pynchon, which include promoting citizenship and building a better community.

Whitney noted, in introducing Casartello, Charland and Flores, that, “There are many, many people who do good work, and there are few who do exceptional work, and deserve recognition,” as did this year’s Pynchon Medal recipients.

Casartello, who in addition to countless hours of pro-bono work as an attorney for the firm of Pellegrini, Seeley, Ryan and Blakesley, was nominated for his longtime advocacy work for Open Pantry Community Service – for which he established the Stuffing the Pantry Thanksgiving Day Road Race, raising $200,000 and 15,000 pounds of food to date – and his support of the childhood cancer non-profit Griffin’s Friends, said he was “humbled, but I’m honored” to be chosen for this year’s Pynchon Medal.

Casartello shared he considered the award not just his, but also “recognition of the good work of all who have worked for Open Pantry and Griffins Friends” alongside him. He also thanked his “colleagues for their help and support to allow me to do the work” for which he was being recognized.

Charland – “The Bike Guy” – was recognized not only for the countless hours and personal investment he has put into refurbishing bicycles for more than 1,200 underprivileged children through his non-profit, Pedal Thru Youth, but also for finding purpose and community involvement in the face of personal tragedy. Charland suffered a traumatic brain injury some years back, the result of a baseball bat assault while working as a bouncer, one of the many jobs he held to support his family. The injury left him with the cognition of a man decades older than was. Concerned he would be a burden to loved ones, Charland was on the brink of putting his affairs in order and calling Death with Dignity when a Springfield school counselor contacted him, asking if he might be able to refurbish some old bikes for underprivileged children. That call led to what Charland calls “the bike thing” – and now involves a warehouse, a complement of Tuesday night volunteers and collaborations with the police in 13 cities and towns from Springfield to Eastern Mass. He also creates and supplies Springfield officers with “safety bags” of toiletries and necessities for the homeless. Charland does all this in the face of an uncertain future, based on living with a cerebral cyst, the result of his injury.

Referring to himself as “not very formal, I’m a simple farm boy,” a humbled Charland said, “I don’t think life is about how much time you have, but what you do with it.”

Of Pedal Through Youth and the bags to help the homeless, he added, “I really think we can make a difference and bring law enforcement and the community together.

“It’s helping us become better people,” he said of his projects, and the volunteers who now work with him.

Flores was nominated not only for his 40-year career in community service – which includes establishing the New England Farm Worker’s Council, dedicated to improving the quality of life for migrant and seasonal farm workers, and Partners for Community, which brings together a network of five non-profit social service agencies throughout New England – but also for his personal commitment to his community through scholarships, gifts and financial assistance to underprivileged families in need.

Flores said he was “honored to be with the people you chose” to receive the 2019 Pynchon Medal. “At the end of the day, we are all together” in trying to improve our community, he added.

“The City of Springfield is an example of what we are going through,” Flores noted. “We are trying to make the best [of things] whether we are white, black, Jewish, whatever … we are working together to be inclusive as we move forward.”