Carew Street intersection to be fixed 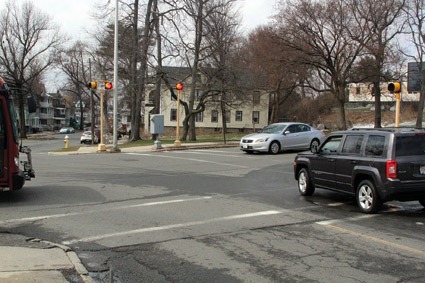 SPRINGFIELD – Mayor Domenic Sarno is not ­­exaggerating when he said a traffic light and road improvements for the Carew Street entrance to Mercy Medical Center have been “a long time coming.”

Sarno was joined by Caritas and Mark Fulco, president of Mercy Medical Center, among others for an announcement on April 2 that later this year the city would undertake a series of safety improvements.

Sarno told Reminder Publications the city is undertaking the project rather than go through the Massachusetts Department of Transportation in order to address the safety concerns in a timely manner.

City Engineer Mark Sokop, who noted he had been in a car accident at the site, explained Carew Street would be widened to allow for the turn lane for both directions to enter into the medical center complex. A full traffic signal would also be installed.

The project will shortly be put out to bid, Sokop said and construction should start this year.

The cost is estimated at $1 million and Sarno said the city would pay for part of the project, while Mercy Medical Center will make a donation to pay for the remainder.

Fulco thanked the mayor for leadership in addressing the problem at this time.

Caritas said, “I lived long enough to see it happen and it’s a glorious day.”