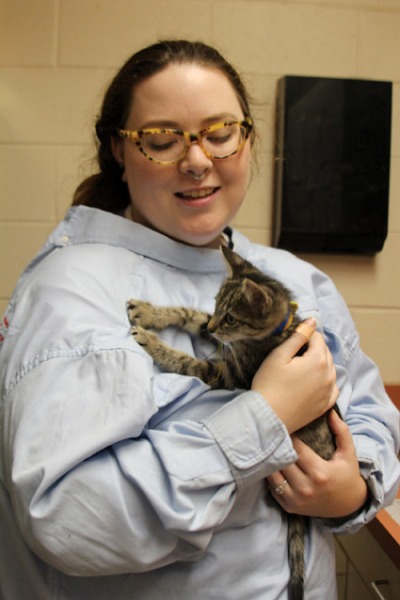 Shana Bartlett holds on to Amelia, a nine week old kitten. Bartlett has been a volunteer for Dakin for a year, and has served as a foster parent for kittens. Reminder Publications photo by Payton North

Nick’s Nursery was established in 2014 and was named after Nicholas J. Piepul, the beloved cat of Jan and Bernadette Piepul.  When Nick was a kitten, he was burned badly.  When the Piepul’s met Nick, they adopted him as soon as he was healthy enough to leave Dakin.

“We’re really excited to celebrate another season of Nick’s Nursery,” Executive Director of Dakin Humane Society Carmine DiCenso said.  “Really what we want to point out about Nick’s Nursery and how important it is to the animals, they would not have another option.   This only exists because of Jan and Bernadette’s efforts, the community, and a great, great core of volunteers.”

Marketing and Communication Manager for Dakin Lee Chambers gave guests a peek into Nick’s Nursery.  The nursery is already filled with small kittens who are on the road to recovery.

Chambers talked about the processes that kittens go through when they enter Nick’s Nursery, “Weighing them, feeding them, giving meds, giving love.  The kittens that come here are the ones that don’t need overnight or 24 hour bottle feeding,” she said.

Kittens that are zero to four weeks old need to have 24 hour bottle feeding or overnight supervision.  These kittens go to foster homes for four weeks until they’re able to enter Nick’s Nursery.  Shana Bartlett has been a volunteer in Dakin for a month, but has been a foster for kittens for a year.

“I always want to keep them, but it’s incredibly rewarding to make the kittens feel better and then eventually they go to their forever home,” Bartlett added, “My last litter, the day I brought them back they were so sick.  They almost died from pneumonia when they were first born.  Then the day I?brought them back here [to Dakin] they were neutered and the next day they were adopted, so it’s really exciting.”

When people find kittens, often they’ll bring them to Dakin.  Other kittens that arrive to Dakin can be strays or orphans.  For a litter of five kittens, the average cost of care is $1,012.  A simple heating pad for a baby kitten costs $21.87.  In 2016 overall, the value of Nick’s Nursery volunteers’ time was over $75,000.

The Piepul’s were originally matching donations to Nick’s Nursery through July 7, however they announced at the event that they will now match donations until the end of July.

Dakin is accepting a series of donations on their Orphan Baby Wish List on Amazon.  To purchase these items, go to http://amzn.to/2uO1P72 or call Dakin Humane Society at 781-4000 for more information.