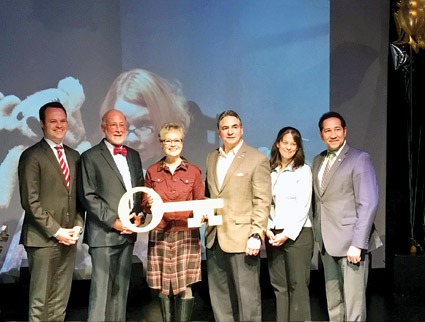 SPRINGFIELD  – The sale of the St. Barnabas & All Saints Episcopal Church to the Drama Studios means a potential increase in programming and in the number of young people served.

The sale was announced Jan. 16 and Steve Hays, the executive director, explained to Reminder Publications that what will come next is a capital campaign to raise the funds to bring the building up top code and transform the former sanctuary into several classrooms.

The Drama Studio has been renting space at the church for almost 30 years.

When the Episcopal Diocese decided to close the church, Hays said negotiations began. “We hoped we’d have a chance of buying it,” he said and added, “It’s took a year to figure out a price.”

Hays said there must be an elevator installed in the three-story building to meet the requirements of the Americans with Disabilities Act and the sanctuary will be transformed into two or three classrooms.

Right now, the Drama Studio serves more than 3,000 students, with 250 enrolled in the acting conservatory with the rest in two outreach programs. The Drama Studio has a “TheaterReaders” program in two Springfield public schools designed to encourage literacy, as well as the “DramaTours” company that performs throughout the system.

The studio offers a coordinated program including both classroom and performance training with more than 25 after-school classes, and six vacation camps for children ages 6 through 18.

According to Carson Satterfield, the studio’s development manager, many of the studio’s alumni have gone on to career in theatre, film and television.

With a greater partnership with the public schools, Hays said it is important to have a facility that is “up to code and accessible.”

The $1.6 million capital campaign will run over a two year-period, Hays explained, with the goal of beginning construction in the summer of 2020.