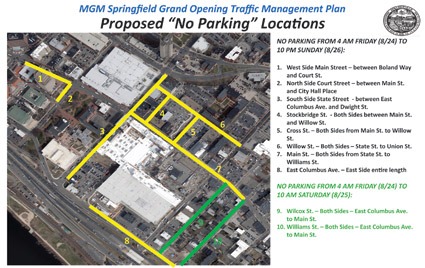 SPRINGFIELD – MGM Springfield has some advice for you when it comes to attending its opening weekend: plan ahead, come early, stay late and have a good time.

According to the presentation the casino made to the Massachusetts Gaming Commission on Aug. 2, planning ahead is indeed important due to the blocked streets, limited parking and other traffic restrictions that will be in effect on Aug. 24.

MGM Springfield is scheduled to open at 11 a.m. on Aug. 24 after a parade with local officials, construction workers, MGM employees and entertainers – as well as the Budweiser Clydesdales – arrives at the site.

In fact, people who work in downtown or have business there on Aug. 24 are urged to use the free parking and shuttle bus from the Big E grounds in West Springfield.

Alex Dixon, the casino’s general manager said, “The message for today is to park at the Big E.”

Springfield Department of Public Works head Christopher Cignoli and Police Commissioner John Barbieri told the commission members of the preparations that have been put in place for the opening of the nearly $1 billion casino complex.

Cignoli said there are “simple steps to ensure a smooth ride.”

Here is what to keep in mind:

Exit 6 of I 91 will be closed during the opening.

The free Loop Bus will be running once the streets are open again. That route pick up and drops off passengers from MGM Springfield down Main Street to Union Station then back down Main Street to state Street where it goes to the Quadrangle, back down to union street and to the Basketball Hall of Fame.

Cignoli added the cars would not be allowed to line up in order to park at the MGM Springfield garage.

Barbieri said the police have a “robust plan” to maintain order and to keep visitors safe. Dozens of officers will be assigned to the area, operating from the new substation on Dwight Street. The commissioner added that two armored vehicles would be in place for use if necessary.

Dixon said there would be two test nights for the casino – one on Aug. 16 for the construction team and their friends and family and Aug. 20 for about 1,000 invited guests.