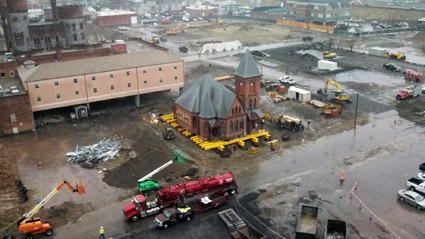 This photo shows how the I-beams have been assembled around the base of the First Spiritual Church building.
Reminder Publications submitted photos

SPRINGFIELD – The former First Spiritual Church is being prepared to move across the MGM Springfield campus, but the actual relocation won’t be for several weeks.

Carole Brennan, spokesperson for MGM, explained to Reminder Publications the full preparations for the move wouldn’t be completed until sometime in mid-April.

The church is on Bliss Street but will be moved closer to Union Street – about 600 feet, Brennan said.

The process to prepare the church is meticulous and the speed to actually get it to the new location will be “a crawl,” according to Brennan.

Photos submitted to Reminder Publications, show the church has been exposed from its basement and a structure of I-beams has been built around it to support it during the move.

First known as The French Congregational Church, it became the First Spiritualist Church in 1919.

The moving of the church is going on as demolition on the campus continues.