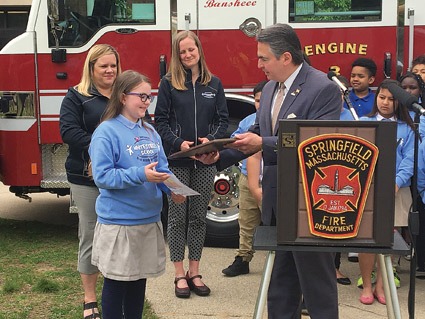 SPRINGFIELD – Fourth-grader Olivia Hall is a fan of the TV show “Supernatural” and knowing that, it makes sense her submission for the name of the new pumper at the White Street Fire Station would be “Screaming Banshee.”

Hall received recognition from Mayor Domenic Sarno and Fire Commissioner B.J. Calvi at a ceremony at the White Street School, which she attended on May 14.

School Principal Kristin Hughes explained the fourth grade was asked to submit a drawing and name for the new pumper truck, which is stationed about a block away from the school.

Hall received a bag of gifts from the Fire department and a plaque noting her name’s selection. She also got to see the new truck with the name painted on it.

Hughes said that Calvi “agonized” over the submissions but ultimately picked Hall.

The $704,898 vehicle has been in service since it was delivered in January.

Chief Fire Chaplain Father Gary Daley then led the audience in prayer and blessed the truck with Holy Water.