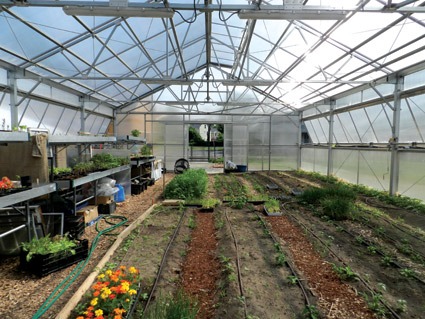 The farm stand (left) will be the home for retail sales, cooking classes and workshops. This greenhouse (right) will allow Gardening The Community to grow vegetables year-round at its new facility on Walnut Street.
Reminder Publications photos by G. Michael Dobbs

SPRINGFIELD – For many years the vacant lot on Walnut Street straddling the Maple High Six Corners and Old Hill neighborhoods was a location for illegal dumping and blight.

Now it is an urban farm prepared to bring forth a harvest of locally grown vegetables.

The new Gardening The Community (GTC) farm stand and greenhouse was officially opened on June 2 with an appearance by Massachusetts Agriculture Commissioner John Lebeaux, members of the neighborhood and supporters.

GTC has been in the city since 2002 and has involved 250 youth who have grown pesticide-free food. Last year, the urban gardens produced more than 4,000 pounds of vegetables at its gardens at 256 Hancock St. and 488 Central St.

Now, as Brandon Robinson, one of the GTC staff explained to Reminder Publications, the organization will have a permanent place of its own. The garden and its two buildings took four years to complete.

Walking around the garden, Robinson said the green house gives GTC the ability to start its vegetable seedlings for later transfer to the garden area. The greenhouse is also used for vegetables that required more heat, he added.

There are already vegetables in the ground covered in parts by straw mulch. Robinson said the variety of vegetables include those that are sought for various ethnic cuisines.

“We grow cultural crops for everybody,” he said. GTC practices organic gardening principles, although they are not certified organic at this time, Robinson added.

On Walnut Street is the farm stand building. Robinson said the building is designed as a retail stand, as well as a place for cooking demonstrations and workshops. It is powered by solar panels on its roof.

Lebeaux said the development was “wonderful,”  and added GTC, which sells its produce, will have a “better ability to distribute to the neighborhood.”

Lebeaux said what GTC has done could serve as a model for other urban gardens.

Liz Wills-O’Gilvie, the chair of the GTC board, explained the other GTC gardens are on leased land and although the organization has appreciated the support of the landowners, such as Mitchell Machine, the non-profit organization wanted a space of its own.

The greenhouse, she added, would allow year-round production, something GTC has not been able to do in the past.

She believes the transformation of essentially a junkyard “bolsters the spirits” of members of the two neighborhoods next to it.

Noting the attention larger economic development projects receive, Wills-O’Gilvie said the city “needs all kinds of development,” such as the new GTC facility.

Beginning in mid-June, the Farm Stand hours will be Wednesdays and Thursdays, from 11 a.m. to 7 p.m. and Saturdays from 10 a.m. to 5 p.m.  GTC’s Farm Share Program (GTC EATS!), where members get bulk pesticide-free vegetables from mid-June through October, also has shares available with picks up Wednesdays and Thursdays at the Walnut Street Farm.  Fore more information go to www.gtcspringfield.org.

“It was important for us to claim a permanent space to grow food for the Mason Square community when we purchased the Walnut Street lot four years ago from the city,” said Ibrahim Ali, GTC co-director.  “We are excited to now have built a structure on the site where we can bring people together around healthy food in any weather and any season.”