Gary Schara enters plea of not guilty at arraignment 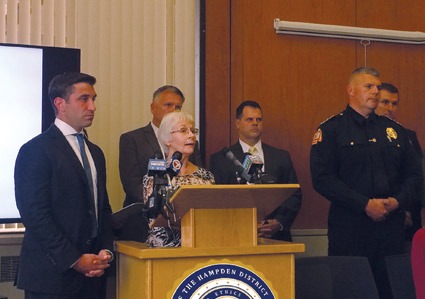 Lisa Zeigert’s mother, Dee, spoke to the press about her reactions to the news. Reminder Publications photo by G. Michael Dobbs

SPRINGFIELD – The mother, father and sister of murdered middle school teacher’s aide Lisa Ziegert of Agawam held hands at the announcement on Sept. 18 that a suspect in the 1992 murder has been identified and issued an arrest warrant.

A former resident and graduate of Longmeadow High School, Gary Schara, currently in custody in Connecticut, has been charged with kidnapping, aggravated rape and murder 25 years after the young woman’s body was discovered.

Hampden Country District Attorney Anthony Gulluni released few additional details about the case after reading a statement. He declined to go into many of the details reporters wanted, reserving that information for the trial.

“The 25 year-long search for answers is over,” Gulluni said.

Gulluni said, “Today, I am informing the public that the search for Lisa’s assailant is over, DNA testing and analysis has confirmed the identity of Lisa’s killer. Last Friday, Sept. 15, an arrest warrant was issued from the Westfield District Court for Gary E. Schara, age 48, of West Springfield, Massachusetts, which charges him with the murder, aggravated rape, and kidnapping of Lisa Ziegert on April 15, 1992.

“On Saturday, Sept. 16 this arrest warrant was executed on Schara. He was located by investigators at a medical facility in the State of Connecticut. He was released from that medical facility this morning and is currently in the custody of the Connecticut State Police on a Fugitive from Justice charge. We are awaiting legal proceedings in the State of Connecticut to determine when Schara will be returned to Massachusetts.

“Over the years, the single-source, male DNA profile developed from the evidence in this case has been recurrently run against state, national, and international DNA database, without a match.

“Considering this fact, in recent months, we decided to direct the investigation back to individuals who were identified as persons of interest over the years whose DNA profile we did not have and were known to not be in the databases. In August of this year, based on a number of factors, including information gained from the Parabon Snapshot analysis, a small list of individuals was developed for whom we embarked on a legal process to obtain DNA samples in order to aid the investigation.

“On the evening of Wednesday, September 13, as a part of this effort, Massachusetts State Police troopers attempted to notify Schara about this process, but he was not home and information was left with someone at the home. On the following day, an individual close to Schara contacted the Massachusetts State Police with information concerning Schara’s involvement in the murder of Lisa Ziegert. This individual provided the state police hand-written documents, purportedly from and by Gary Schara, in which he admits to the abduction, rape, and murder of Lisa Ziegert.

“On the evening of Thursday, September 14, troopers and members of the Agawam Police Department attempted to locate Schara. It was learned that Schara had fled to Connecticut. Upon a response by law enforcement authorities from Massachusetts and Connecticut, Schara was located after his attempt at suicide. The investigation continued with interviews of witnesses and the application for and execution of search warrants.  From evidence collected in these searches, a sample of Schara’s DNA was obtained. It was then tested and matched to the single source male DNA profile previously developed from the evidence in this case. Through the determined and skilled work of many investigators, we have arrested the person who is responsible for the heinous acts committed against Lisa and the 25 year-long search for answers is over.

“Throughout my involvement in this investigation, I have kept in touch with the Ziegert family. Through the many years since 1992 and the dozens of investigators, victim advocates, and prosecutors, the constant has been the Ziegerts’ resolve, strength, and courage. They have been a source of inspiration and drive for me, and everyone who has worked on this case. I confidently speak on behalf of all my colleagues, past and present, when I say thank you to Mr. and Mrs. Ziegert for their steadfast patience and support. My thoughts remain with Lisa’s family, as they remember their daughter and sister.

“Aggressively pursuing all means of investigation, including the use of new technologies, to bring justice for Lisa, and all victims of homicide and their families, remains the priority of my unsolved homicide case unit and my administration. My staff and investigators spend countless hours reviewing and persistently working on leads in unsolved cases. While time goes on, the memories of the victims and the dedication to justice never fades.

“I want to publicly thank everyone who worked on this investigation over the last 25 years. It is a culmination of their hard work and dedication that we have arrested Lisa’s killer. Integral to the arrest were the Agawam Police Department, the Massachusetts State Police Detective Unit assigned to Hampden District Attorney’s Office, Massachusetts State Police Crime Laboratory, and FBI.

He concluded, “The case will now be presented to a grand jury, and the legal process toward securing a conviction will begin.  To maintain the integrity of that process, many details of the investigation cannot be released at this time. After 25 years, it is now my intention, along with my staff, to obtain justice for Lisa by pursuing the prosecution and conviction of Gary Schara.”

Schara has been brought to the Agawam Police Department and was arraigned in Westfield District Court. He entered  a plea of not guilty.

Gulluni refused to speculate on the motive for the murder, although he said the investigators  “have a sense of why he did it.” He added the victim and Schara did not know one another.

Lisa’s mother Dee was the spokesperson for the family, said she and her family have “very, very mixed feeling.”

She said, “We are satisfied knowing she will have her justice” and added the family’s “faith never waivered.”

When asked to describe her daughter, she said, “She was a good person with a beautiful smile who warmed a room when she walked in.”