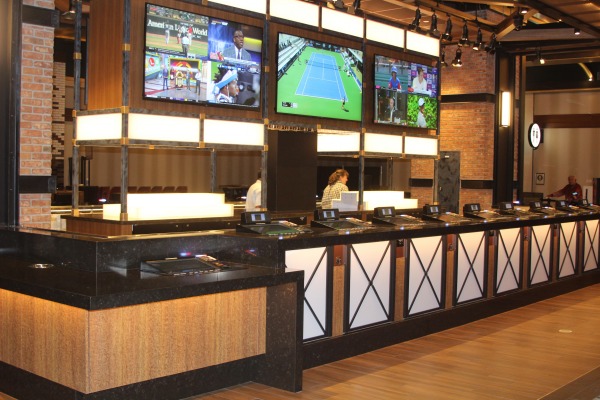 Among the changes being implemented is a new bar located near Cal Mere that will open shortly at MGM Springfield.
Reminder Publishing photo by G. Michael Dobbs

SPRINGFIELD – Michael Mathis, the president of MGM Springfield, took time on Aug. 19 to meet with reporters and assess the first year of the nearly one billion-dollar casino. While some aspects of the business could have been handled differently he admitted, Mathis believes that having attracted nearly 6 million visitors in the first year is an accomplishment worth noting.

He said the ramp-up to having a casino with the right features and marketing correctly is a three-year process. He noted MGM Springfield has faced “really strong competition” from the Connecticut casinos and “underestimated that level of loyalty [from potential customers].”

Much press attention has focused on gaming revenues that have not met the stated initial expectations. Mathis explained that many of those forecasts were made in 2012 at the beginning of the process, which was put on temporary hold by a state wide referendum on casino gaming.

He explained that gaming and subsequent tax revenue is only part of the overall financial picture for the casino.

He noted the casino’s hotel is one of the most successful in the region and the success of the casino has resulted in increased business at other hotels in the city.

He is also proud of the fact that 40 percent of the work force is Springfield residents. Mathis noted the overall work force is about 2,300 people, which is less than the 3,000 jobs that had been predicted. He said the casino did not go through a layoff, but rather “right-sized the business” after it opened.

Mathis added that reaching the goals of 50 percent of the workforce being women has been difficult to reach but the management is continuing to meet that goal. Mathis is also proud of seeing economic development such as the new CVS being built at the corner of Main and Union streets as well as the planned expansion of The Red Rose restaurant.

He added the deal for market rate apartments that is part of the MGM host community agreement be located at 31 Elm St. is “really close in our minds.”

While pundits have expressed concern about competition, Mathis said there is no specific strategy in competing with the two Connecticut casinos.

“In our view of the market we can all co-exist,” he explained. Entertainment offerings have done much to bring people from other areas of New England and New York, and Mathis said people would see even more shows and events in the second year.

Listening to customers and what they want has been very important, he said. He explained for instance people in this market like the table game known as “Let it Ride,” so it is offered by the casino as well as “stadium games” – electronic version of some table games – that are also popular.

He said MGM Springfield is “largely a day trip market” and the goal is to reach a level of loyalty other casinos see – many have customers who come to a casino 80 times a year.

He said the company has added increased signage leading customers to the casino. “We underestimated how important it is to point people to the front door,” he said. An animated billboard, initially denied by the Massachusetts Gaming Commission, will go in front of the commission again for approval, he added.

With the acquisition of a casino in Yonkers, Mathis said marketing to those customers has resulted in many of them coming up to Springfield to see this casino.

Although there have been media reports about MGM Springfield having issues with the number of “high rollers” coming to the casino, Mathis said there is no problem.

“We attract them all the time. They come back,” he noted.

The establishment of sport gambling, now under consideration by the Legislature, is very important to MGM Springfield, Mathis said. He believes that with sports betting the casino could see an increase of 10 percent in gaming revenues.

“We have a plan to turn on the sports book very quickly when they give us a green light,” he asserted.

In the long term, Mathis sees the unique MGM Springfield design as a “legacy for the industry.”

He said the biggest surprise for him was to see many people with a connection to the city, come to the casino and “show off the place.”