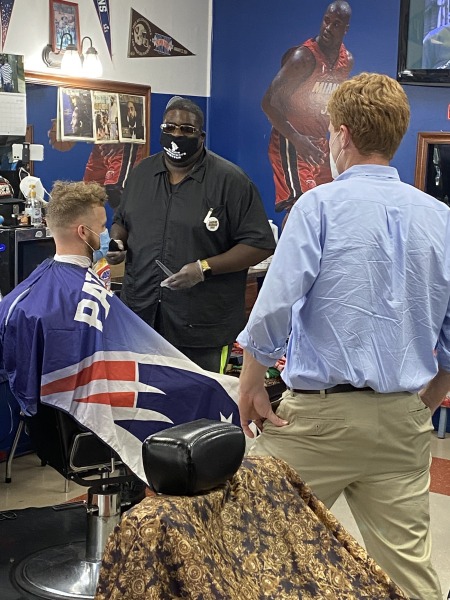 SPRINGFIELD – Congressman Joseph Kennedy III asked Clarence Smith, the owner of The Finishing Touch Barber Shop in Mason Square, what should he know about Springfield.

Smith had an immediate answer. “A lot of funding gets into the wrong hands. I just want Black and Latino businesses to get a fair chance.”

Kennedy was touring Western Massachusetts on July 9 as part of his effort to listen to small business and well as promote his Kennedy Jobs and Justice Initiative (JJI), a legislative proposal that is part of his campaign for senate against incumbent Edward Markey.

Kennedy’s campaign described JJI as a two-part effort: “First, a short-term worker activation that acts as the JJI’s immediate crisis response program. States, localities, and tribal communities will identify areas of need and create hiring opportunities for safe jobs that are critical to our reemergence from this pandemic. Such jobs will be funded and coordinated under the JJI. Funds may also be used by municipal governments to help retain existing public employees with a focus on community development, including teachers, firefighters, and other public servants. The federal government will provide funding directly to states to carry out those goals.

“For the second phase, the JJI will implement a large-scale public works and federal hiring program that puts Americans to work, provides economic and health stability, and builds the foundation for a just, equal, and resilient post-COVID America. Partnering with community colleges and other local education entities, labor unions, workforce development organizations, and re-entry programs for formerly incarcerated individuals, the JJI would create training programs specifically geared toward increasing rates of minority and women workers in underrepresented fields.”

Smith told Kennedy there are many businesses affected by the pandemic that are not coming back. He mentioned The Big Mamou, an iconic restaurant has closed in part due COVID-19.

Smith noted that before the pandemic his shop was full of people, getting haircuts and socializing. Pointing to a frame print on the wall of a Black barbershop, Smith spoke of how things have changed. He still doing business, but he sees how the pandemic has affected others.

Smith also told Kennedy that many small businesses he knows have applied for the federal Payroll Protection Program (PPP), but have not yet heard if they qualify.

Kennedy said many of the business people with whom he has spoken have not received the PPP. “Obviously there is need for improvement,” he said.

He added its “absolutely critical” for Congress to pass The Heroes Act, which would supply more funding to states, businesses and individuals.

During a discussion with the press, Kennedy described his legislation as “a living, breathing document.”

Despite differences in types of business he visited, Kennedy said there are underlying conditions that remain the same: “a lot of uncertainty and a lot of pressure and burden that are being put in business owners and families … To come out the this crisis we need change and we need these big structural investment,” he said.

He said regional equity is still an issue in Massachusetts and an “economy that actually works for everybody no matter where you are around this state, around this country.”

Kennedy sees the further development of green energy, both solar and wind and the establishment of east-west rail as important factors for the economy.