Kennedy opens Springfield in his campaign for the Senate 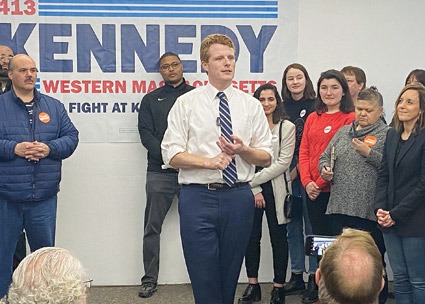 SPRINGFIELD – Congressman Joseph Kennedy III opened his campaign office in downtown Springfield on March 7 and pointed out his five offices across the state indicates his commitment to the Commonwealth as a whole.

Kennedy made the remarks before a large crowd of supporters in the office at 1301 Main St., Suite 202.

Kennedy is running against incumbent Sen. Edward Markey at a time when other established Democrats are being challenged by younger members of the party.

It is that refusal to “wait your turn” that has attracted the support of Springfield City Councilor President Justin Hurst. Hurst said embracing the status quo “leaves behind cities like Springfield.”

Hurst said Kennedy has a commitment to Western Massachusetts and that too many elected officials “go to Boston and we never hear from them again.”

Kennedy said he is living up to his promise of being in Springfield.

Noting the presence of Lesser, with whom he has been friends for years, he said with a laugh, “I’m going to make Sen. Lesser so sick of hanging out with me.”

Kennedy added this was his 12th visit to the city. He mentioned the legacy of Kennedy family supporters in Western Massachusetts and pointed out several people who have worked politically for people such as President John Kennedy and Senator Ted Kennedy.

He will be coming back to the region for a televised debate on March 18.

For Kennedy the race is definitely a marathon, rather than a sprint. He told his supporters, “We’ve got six months to go to the primary, then two months after that [to the November election] than hopefully we will have six more years to prove [his commitment to Western Massachusetts] after that.”