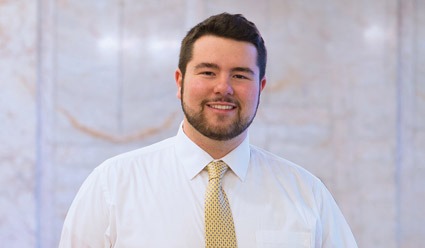 SPRINGFIELD – Community activist Jesse Lederman is making a second run at the City Council and an at-large seat.

Lederman was the runner-up for a seat on the council and told Reminder Publications he enjoyed the opportunity of knocking on doors throughout the city, attending union meetings and meeting people.

For his second campaign, Lederman will conduct a formal kickoff at 5:30 p.m. April 19 at Nathan Bill’s Bar and Restaurant at 110 Island Pond Road.

A lifelong resident of Springfield, Lederman is a graduate of the University of Massachusetts, Amherst, and holds a Bachelor’s Degree in Political Science. He is currently the Director of Public Health and Environmental Initiatives for the Springfield community non-profit, Arise, where his most recent project involved leading negotiations for the repair of more than 500 gas leaks across Springfield.

In the past, Lederman has worked on the campaign staffs of U.S. Senator Ed Markey, as a deputy field organizer, and State Treasurer Deb Goldberg, as a regional field director.

Lederman’s initial foray into politics came about with the campaign to try to stop a biomass electrical generating station. He has served as a board member of the McKnight Neighborhood Council, and is an elected member of the Massachusetts Democratic State Committee, in addition to serving as the Chairman of the Ward 4 Democratic Committee, and on the Board of Directors of the Springfield Preservation Trust. He is also a member of the Governing Board of the Springfield Renaissance School.

Lederman said he would work to make local government in Springfield more accessible and more proactive. He noted he puts his cell phone number on every piece of campaign literature and that he won’t be changing it after the election.

“Constituent services are a big part of my campaign,” he said.

He noted that much of the city’s developmental energy has gone to downtown and his “first priority to ensuring the benefits go to the neighborhoods.”

Speaking of MGM Springfield, Lederman added, “I hope it will draw for more folks to come and stay in Springfield, but I don’t want to lose sight of neighborhood issues.”

If elected he would work to make sure MGM abides by the Host Community Agreement and expressed particular concern about the status of the 54 market rate apartments that are part of the agreement.

“I’m concerned about the negative factors that come with the casino,” he said.

Lederman also would work to have the Springfield Ethics Commission to be fully appointed, and will support new legislation to increase transparency in the local permitting process.