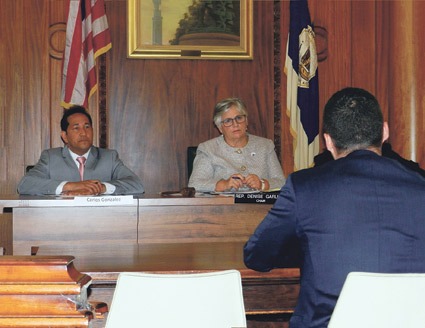 SPRINGFIELD – City councilor Melvin Edwards told a number of state representatives and a state senator about the group homes that have appeared in his neighborhood, Ward 3, which consists of parts of Forest Park, Maple High Six Corners and the South End.

In a hearing at Springfield City Hall for a bill in the House that would return some local approval to the siting of groups homes and other institutions, Edwards described a simple walk from the Sheriff’s facility to treat addicted prisoners on Mill Street to four more groups homes on Pine Street and beyond.

The Dover Amendment is the Massachusetts law that exempts “nonprofit educational corporations” who own or lease land for educational purposes from many local zoning ordinances and bylaws.  Substance use treatment facilities with a primary educational purpose are among the exempted entities.

State Rep. Carlos Gonzalez has authored a bill that would return control to municipalities for new groups homes that wish to go into low income areas that are over-saturated with existing facilities.

The law, if approved would exempt “cities and towns with a median income of 60 percent or less of the average median income in Massachusetts from the Dover Amendment for land or structures used for educational purposes, including the purpose of opening a substance abuse or alcohol rehabilitation center or clinic, unless the city’s or town’s legislative body gives first approval.”

The bill would also require “any entity that purchases property for education purposes under the Dover Amendment who fails to substantially improve the property within two years be assess[ed] at the property’s highest and best use at commercial rate.”

Edwards noted that in his ward there are many large old homes that are affordable to speculators who see a business opportunity to buying a property and then leasing it to a group home. The city councilor added he didn’t think the authors of the Dover Amendment every thought of the business side of the law.

Gonzalez told the hearing of the Joint Committee on Mental Health, Substance Abuse and Recovery, chaired by state Rep. Denise Garlick, his intent was not to work against the mission of non-profits that offer programs to help people, but rather “to protect from over-saturation.”

He stressed, if passed, the law would not be retroactive, and there would be no closings, cutbacks, no services or jobs lost.

Gonzalez sees his legislation has potential forcing group home and addicting programs into communities where there is a need, rather than clustering them in urban areas. State Rep. Susannah Whipps of Athol and the Second Franklin District said many of her constituents must drive up to an hour to seek such services.

“The legislation is critical so local services are available to everyone,” Gonzalez said.

He added, “The 10th Hampden District is over-saturated with programs and services that should be spread out through the state of Massachusetts.”

His City Council colleagues, E. Henry Twiggs and Michael Fenton, in support of the legislation, joined Edwards. Fenton said while “ the spirit of the original intent was true and just,” he believes that now communities such as Springfield should have some approval powers.

Mayor Domenic Sarno said that while he welcomes programs that “have a track record and are respectful to urban centers,” he is concerned about those program that “cause a tremendous amount of turmoil in my neighborhoods and that’s unacceptable.”