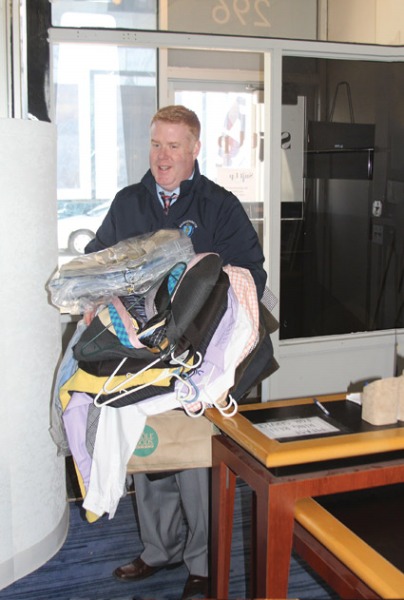 SPRINGFIELD – Men in need of suits to apply for jobs may be wearing clothing worn by state representatives and senators.

On Dec. 21, state Sen. James Welch brought in about 20 used suits, shirts and a bag of ties to Suit Up Springfield, the organization that works with men who need formal clothing for job interviews. Welch conducted a clothing drive at the State House for the Springfield group.

Suit Up Springfield Board member Ryan McCollum said that in the last two years the program has helped several thousand men in the area.

In mid-November, Welch started his clothing drive and was assisted by other members of the Springfield delegation.

Welch said the program is helping “to change the lives of so many young men across Western Massachusetts.”

He said soliciting used suits at the State House was “ a natural fit.” He noted that everyone wears suits “and some have out-grown the suits or in a good case have shrunk so the suits no longer fit.”

What was equally important, Welch said, was the campaign raised awareness “about what a great organization [Suit Up Springfield] is.”

Welch said he is going to continue the effort, asking the people who work in the State House to bring used suits, shirts and ties to his office.

“It’s an opportunity to give back and give it forward,” he said.

For more information go to http://suitupspringfield.com.