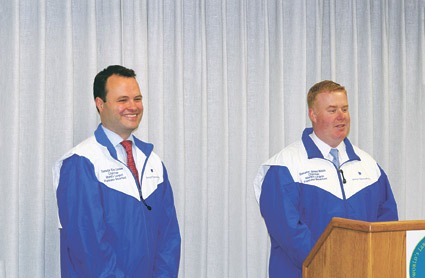 SPRINGFIELD – State Sens. Eric Lesser and James Welch were named this year’s honorary co-chairs of 2016 World’s Largest Pancake Breakfast at an announcement on May 3.

Both legislators support tourism efforts in Western Massachusetts and helped the Spirit of Springfield, the organization that presents the breakfast, with some needed state funding.

This year’s Pancake Breakfast will be May 14 from 8 to 11 a.m. in the middle of Main Street. Admission and beverages are free. Breakfast tickets are $1 for children, $3 for adults, free for active military and Bright Nights Loyalty Card Holders. More than 60,000 free breakfast tickets will be distrusted to area school students.

Mathis also announced MGM Springfield will have two dunk tanks at the breakfast to raise money to send a Springfield American Legion baseball team to North Carolina. He personally challenged Mayor Domenic Sarno to be one of the people to be dunked and said he would contribute $500 to throw three balls at the target that would send Sarno into the water.