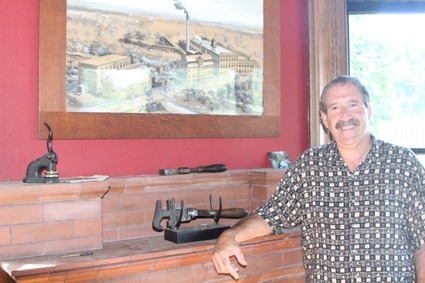 Owner David Rothenberg is seen in his office.

SPRINGFIELD – Thousands of people drive by the two joined factory buildings at the south end of Main Street every day, but relatively few of them may be aware of the buildings’ history or their new use.

Inside the Monkey Wrench building at 143 and 125 Main St. are offices, retail businesses and artist studios. Some of the businesses have signs announcing their presence but many do not.

For owner David Rothenberg, whose business The Design Resource Center of New England also operates in the building, the more than century-old structure is a business incubator, giving people an opportunity to try out a dream.

“I hate the ‘L’ word: landlord,” Rothenberg told Reminder Publications. He sees himself as a business partner to his diverse group of tenants.

In the four stories of the building at 143 Main St. are VIP Cuts, a barbershop; SQT Tattoos; Love on Paper, a photography service; Warehouse Convenience store; In the Mix DJ School; Nieves Wrestling; Youman’s Kenpo Warriors; Capital Income Tax; the Serenity Club; The Studio Zumba Fitness; Monsoon Coffee Roasters; Springfield No One Leaves; and Microscalp Clinic, among others. Wellspring, a non-profit organization, operates a worker-owned upholstery business, a worker-owned operation of which Rothenberg seems very proud.

Artist Marlon Seymour is another tenant Rothenberg has had for years. Seymour recently sold a number of his paintings to MGM Springfield for display at the nearly $1 billion complex.

At 125 Main St. is The Council Real Estate Group, and Rothenberg’s offices. Appropriately enough, he works out of the office of the president of the Bemis & Call Tool Company, which built the two buildings and manufactured a variety of hand tools for over a century.

Some of his tenants have been for him for 20 years, while others are new.

He explained that he would sit meet with a prospective tenant and go over his or her business plan. He wants people to succeed and will coach them to be prepared to launch their business.

The result is he said, “People in this building make up a remarkable community of an urban place.”

Rothenberg’s business, The Design Resource Center of New England, is an outgrowth of Bottaro-Skolnick. He was with that company for 30 years and eventually took over the retailer known for upscale furniture and interior design.

He bought 125 and 143 Main St. from a descendent of the Bemis family. Bemis & Call was a tool-making firm that started in the 1850s in Springfield that sprung to prominence when it bought the patent to the adjustable wrench – or monkey wrench – from its inventor Solymon Merrick. The company survived the Great Depression and the Hurricane of 1938 before closing its doors in 1988.

It was located to take advantage of the Mill River, which flows from Lake Massasoit – better known as Watershops Pond – the home of the manufacturing facilities of the U.S. Armory. Rothenberg said the stretch of waterpower was called “The Golden Mile.”

Speak to Rothenberg for a few minutes and his passion for the city’s history becomes as apparent as his enthusiasm for finding new uses for his old building. Inside his office her has created a museum quality display of vintage Bemis & Call tools. A century old painting hangs over the fireplace showing the factory complex as it once was.

A Springfield native, his parents settled here in 1939 successfully escaping from Nazi Germany and the Holocaust. Rothenberg lived not far from the factory and remembers with fondness catching frogs in the Mill River.

Although he now lives in Amherst, he feels great affection for the city and views himself as the “caretaker” of a building that played a prominent role in Springfield’s history.

Barry Clark is one of Rothenberg’s tenants. He now operates his Offbeat Records out of the 143 Main St. building. In business for 30 years, he previously was located in West Springfield and Chicopee.

His business of selling over-stock records, CDs and DVDs has evolved and now Clark acts as a middleman finding buyers for a wide variety of merchandise.

He recalled with a smile he sold five shipping containers of outdated cigarettes and managed to find buyers for 80,000 selfie sticks. Much of the merchandise he handles includes consumer electronics and general consume items.

Since moving here about five years ago, he said he has seen the building change with the inclusion of more tenants.

“Everybody shares. Everybody watches out for each other, at least on this floor,” he said.

Clark’s office is in the first floor, which Rothenberg recently renovated.

“The building has a lot of potential as do the tenants themselves,” he added.