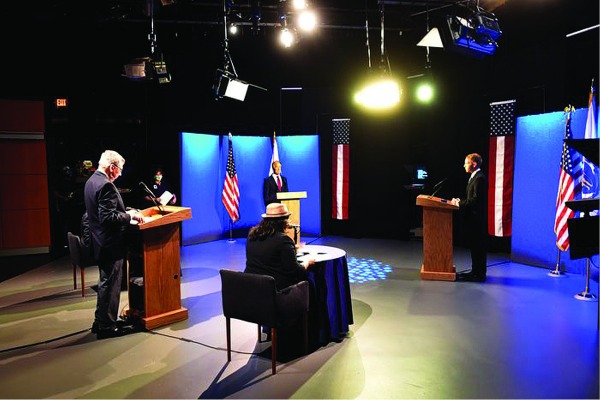 SPRINGFIELD – 2020 will go down in American history for many reasons, but at least locally one of those events will be the challenge to Congressman Richard Neal by Alex Morse, a member of his own party and a mayor of a city that Neal has represented and helped.

After a year of campaigning, both men stood face to face – at a correct social distance, of course – in the television studios of New England Public Media for an hour-long debate, the first of two scheduled meetings – the other being Aug. 20 at 8 p.m. on 22News.

Moderator Ray Hershel used questions from viewers and had two reporters in the room as well to supply additional queries – Danny Jin representing The Berkshire Eagle and Elizabeth Roman for The Republican and MassLive.

Hershel’s first question for Morse cut straight to the most recent development in the campaign, the question over Morse’s personal life while a part-time instructor at the University of Massachusetts. Morse was accused of dating students who felt intimidated by his stature as an instructor and mayor. Subsequent news reports have alleged some of the people behind the release of the information used it and the timing to hurt Morse in the election.

Morse called the release of the information “a political hit job” and the product of the “Springfield political machine.” While he did say he never wanted anyone “to feel uncomfortable” in a personal social setting, he did not apologize for seeking potential dates among students.

Speaking of what he called a smear, he said, “This is exactly what turns people away from politics.”

Morse then upped the ante of the responsibility for the story saying it “goes all the way to the Democrats in Washington, D.C.”

Neal was firm in his denial of any involvement with the students who released the initial information. He noted the university has started an investigation and said, “I’m more than content to let the investigation take it course.” He stressed he has “no room” for racism, homophobia or misogyny in his campaign.

Hershel asked Neal abut a major point Morse makes in his campaign: Neal’s status as the number one member of Congress for corporate and PAC donations.

Neal said he had voted for every bill for campaign reform and had fought against the “Citizens United disaster.” Neal said he has raised funds that then he donated to assist “black, Latino and equality” candidates for Congress and had recruited candidates for congressional seats.

Neal listed the effects of the CARES Act, much of it he wrote as chair of the House Ways & Means Committee, including helping states pay for unemployment to stimulus checks to loans to small businesses.

“If you contribute to my campaign you buy into my campaign, I don’t buy into yours,” Neal emphasized about the relationship between himself and contributors.

Morse ignored the list from the CARES Act, even though Neal cited how it affected Holyoke Medical Center and Holyoke Health Center.

“Our [political] system was broken before the pandemic,” Morse rebutted.

Roman posed a question of how a $34 trillion estimate for Medicare for All could be financed, a question both candidates essentially ignored.

Morse spoke about the need for Medicare for All and going to North Adams to see how that community is losing health service.

Neal shot back that while it was good that he visited North Adams, Morse might have stayed in Holyoke where as mayor he missed schools committee meetings, school building committees and other civic meetings.

Morse asserted that Neal’s charges were recycled talking points from people who had challenged him in mayoral contests.                              Addressing Neal, Morse said, “It’s all laughable to talk about accessibility and showing up.” The mayor claimed that Neal has not been present in the district.

Neal said he could show proof of 700 public events in which he took part during the last eight years.

When asked by Jin about reducing the military budget while protecting the economic impact of the defense program on local businesses, Morse spoke of closing “hundreds” of unnecessary military bases around the world. He added he was not talking about local jobs.

He added that both Democrats and Republican have benefitted from war.

Neal noted the economic impact from both Barnes National Guard Base in Westfield and Westover Air Reserve Base in Chicopee as well as precision manufacturers in the district that are making parts for the military. He then explained he had voted against the war in Iraq.

In a question about racism, Neal spoke about what he did as mayor of Springfield – such as divesting of South African investments and setting up affirmative action programs. He also spoke his friendship with the late Congressman John Lewis, the civil rights legend, who supported Neal’s reelection effort.

Morse charged that Neal “is standing on the sideline.”

When Morse attacked Neal for not yet obtaining President Donald Trump’s tax records, Neal explained how he consulted with attorneys to make sure he went forward in the proper way.

“I’m not going to screw this case up,” Neal said bluntly. He added that Speaker of the House Nancy Pelosi approved his approach.

Morse said in a rebuttal, “You don’t work for the speaker, you work for the people.” He added that Neal had “dropped the ball.”

After the debate, Reminder Publishing asked Neal about the Medicare for All question. Although he did not say how the proposed program would be funded, he did say he would support it as long as organizations such as unions that had fought for health plans for their members would have the option to retain their plans.

Morse said at a post-broadcast Zoom press conference the money would come from the $500 billion that goes to private insurance companies as well as reallocating defense funds.

He also asserted the debate showed that Neal is “incapable of grasping” the issues of the day.

After the debate there was a flurry of press releases from each campaign emailed to the press.

Morse sent a release that read in part, “In a show of strength just a few hours before the first MA-01 Congressional Democratic Primary Debate, new polling from Beacon Research shows Holyoke Mayor Alex Morse closing the gap between himself and Congressman Richard Neal.

“In a sample of 391 Democratic primary voters taken August 15th through the 16th, Morse is at 41 percent to Neal’s 46 percent. Thirteen percent of voters are undecided.

“The poll also showed that 85 percent of voters have heard of an issue with the UMass College Democrats and Alex Morse. Fifty-five percent say it didn’t change their opinion, and 21 percent said it made them more likely to vote for Morse.

“An earlier internal poll from the campaign showed Morse at 35 percent to Neal’s 45 percent, with 20 percent of the vote undecided.”

Neal’s campaign sent out releases addressing specifically some of the points Neal brought up in the debate about Morse’s record as mayor. In one release, he detailed Morse’s attendance record with information obtained from the Holyoke City Clerk.