Neal: government will re-open through ‘debates’ 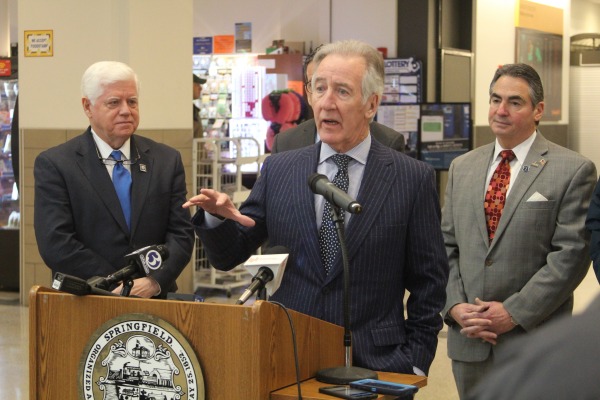 SPRINGFIELD – Congressman Richard Neal expressed the current government shutdown was “completely unnecessary” and said the new Democrat-controlled House of Representatives will “try to get the government open through negotiations and debate.”

Neal made the comments last week at a press conference designed to thank outgoing Connecticut Gov. Dannel Malloy for his efforts that resulted in the extension of the Connecticut commuter rail line into Springfield.

Malloy, Neal explained, used federal stimulus money to improve the track to provide greater commuter lines in Connecticut and to extend the increased service to Springfield.

There are 17 trains connecting New Haven, CT., with Hartford, CT., and 12 that are connecting Hartford with Springfield, Neal noted. Two thousand additional commuters a day are using the line, he added.

The Connecticut commuter line will be undertaking a pilot program this year to bring the trains to Greenfield, Neal said.

Malloy said the additional rail service was slowed down because of negotiations with Amtrak and added the popularity of the service requires Amtrak to add more cars to its trains in the state to accommodate the demand.

Some of the trips use commuter rail cars, while others are on Amtrak trains.

Larson thanked Malloy for the expansion and said the governor “stood up and made the tough decision.”

Neal said this kind of infrastructure improvement is something he hopes will extend throughout the nation and is one of his three priorities as the in-coming chair of the House Ways and Means Committee. There is a “bad need” for improvements to the country’s water supplies, sewer systems, bridges, highways, rail lines and airports.

He added members of the Trump Administration have agreed to the importance of infrastructure reform.

Larson said the United States spends less than 2 percent of the federal budget for infrastructure while China spends more than 8 percent. He said the nation’s infrastructure has been evaluated by engineering groups and given a “D-” grade.

“It’s a serious problem we face,” he said.

Neal said his other two immediate priorities are protecting the pre-existing conditions clause of the Affordable Care Act and strengthening retirement savings programs.

Larson noted the 800,000 federal employees who are now out of work and said, “It didn’t have to be this way.”

Referencing President Donald Trump’s desire to have the southern border wall funded as part of a new spending package, Neal said, “There are ways you could do border security without a wall.”