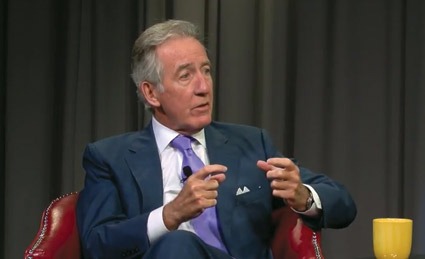 SPRINGFIELD – Congressman Richard Neal revealed that he misses the Congress that he originally joined – a body that could come to compromise and consensus about important issues.

“I think stalemate has become part of the modern Congressional cycle,” Neal said. He added Congress is capable of accomplishing “big things,” but “at the moment it’s hard to see the roadmap to indicate where we’re going to find that common agreement.”

None-the-less, this is a busy time for Congress as Neal revealed to this writer during an interview for Focus Springfield and Reminder Publications.

Neal said it is very difficult to gain and keep the attention of many Americans about topics such as tax reform when their attention is often “sidelined” by other issues in the social media and the breaking news cycle.

Commenting on a list of issues, Neal said the recent budget agreement, which will ensure the government’s funding until Oct. 1, should  “lower the temperature inside the House.”

That budget agreement was “good for Democrats and okay for Republicans,” Neal said. He added he accepted the increase in military spending especially since all of the cuts, which had been reported in the press, were averted.

Speaking of the political potential for having the border wall with Mexico coming to reality, Neal said, “The Republicans from Texas don’t want the wall to be built. I think you’re going to see a retreat from the Trump Administration. There is very little support, if any, on the Democratic side of building a wall.”

A cost analysis from the Massachusetts Institute of Technology placed the cost of the 2,000-mile wall at $40 billion, Neal said.

“The likelihood we’re going to build a 2,000-mile wall on the border of Mexico is almost non-existent,” Neal asserted.

Neal, who is the ranking Democrat on the House’s Ways and Means Committee, said the tax plan introduced by President Donald Trump’s administration would be competing in the House with a tax bill being developed by House Republicans.

Neal noted the ACA was polling higher in a Gallup survey after the passage of the new legislation.

He explained 22 million people have acquired health insurance through the ACA and now there are 9 million people in the country who are not insured. The controversy over the ACA has been the mandate, compelling uninsured people to join the program, an idea, Neal said that first originated from President Richard Nixon.

“In normal times, we would have fixed some of these issues and moved on,” he said. Neal used the example of amending Medicare Part D to address flaws in that legislation.

“Why that couldn’t be done with the ACA is beyond me,” he said. Neal added, “The argument over the ACA was more about ideology than it was about healthcare.”

“So there’s plenty to do. Infrastructure languishes because I think it should have been made the priority it would have built some good will. Both sides are in support of infrastructure spending, but I think the other issues are certainly more divisive, “ Neal said.

The 40 members of the Freedom Caucus, who Neal described as “clearly on the outside of the mainstream public life,” have proven to be capable of holding up legislation proposed by the Republican leadership in the House.

Neal also noted that both Republican and Democratic presidents have used executive orders to achieve legislative goals instead of going through the Congressional process, ensuring a succeeding president of a different party may overturn it.

Speaking about trade issues such as NAFTA, Neal said the Trump Administration’s stand on trade “changes pretty rapidly.” Noting that Trump promised to pull out of trade agreements during the campaign, he added, “I dare say the rhetoric does not match the performance as we wait for the confirmation of the president’s new trade representative.”

The United States has only 5 percent of the world’s population and the idea it would “close its doors [to trade] would be a huge miscalculation,” Neal said.

He explained the United States needs to “figure out how to level the playing field” so American exports would be competitive in European markets.

“Wherever we could improve a trade agreement we should do it,” Neal said.

To view the complete interview go to https://www.youtube.com/watch?v=NPcfsdd0QL4&feature=youtu.be