New book recounts the origins and impact of Downey Side 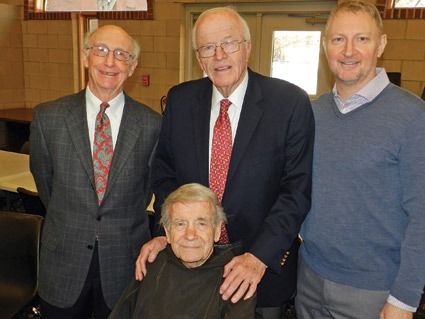 Jim Tourtelotte, Michael Ashe, Ian Keldoulis and Father Paul Engel were at the book signing for Keldoulis’ new book on the history of Downey Side.
Reminder Publishing photo by G. Michael Dobbs

SPRINGFIELD  – In 1967, a Catholic priest met with several people to try to address an issue that affected thousands of children: finding a way to place teenagers who were either in the foster care system or reform schools into loving, permanent families.

The solution they sought became Downey Side and in the passing years the organization has successfully found homes for 7,000 children.

A new book “America’s Youngest Hostages,” details the creation of Downey Side and its efforts, and the author and a number of the people who helped found Downey Side reunited at a book signing and reading event at the Bishop Marshall center at St. Michael’s Cathedral on Dec. 5. Proceeds from the sale of the book benefit the organization.

Former Sheriff Michael Ashe said the event was “ a celebration of a wonderful Capuchin priest who had a vision back in 1967.”

Author Ian Keldoulis recounted how a young priest, Father Paul Engel, who was stationed at St. Francis Chapel on Bridge Street in 1965 met a 16-old-boy who had been through the reform school system and was now working to support himself.

Something was missing in his life and Engel recognized the boy needed a caring adult in his life. He asked a parishioner, Margaret Downey, if she would help the young man.

That first adoption led to Engel considering what to do to help other children in similar situations.

Keldoulis described Engel as having a “relentless vision” with helping children. His book details both the support and the challenges the founders of Downey Side faced in the organization’s early days. Some people reacted to it with donations and support while others were suspicious of the first group home for a number of the children.

As Keldoulis noted, the organization came about at a time when the status quo in the nation was being challenged – from Civil Rights to the Vietnam War. How the state cared for orphans and troubled youth was another issue to question.

Keldoulis told Reminder Publishing he wrote this book not only to recount the history and work of Downey Side, but also to “shine a light” on the current foster care system, which he called “deplorable.”

He noted there are 500,000 in foster care systems right now in this country and that each system varies from state to state.

Keldoulis called the current system as “entrenched and self-perpetuating.”

Attorney Jim Tourtelotte was one of the founding members of the organizations and noted it started simply with one boy and one person willing to care for him.

Tourtelotte said the group’s first employee was a young social worker named Michael Ashe. Ashe said working for Downey Side “gave me an opportunity to put my money where was my mouth was in helping kids.”

He added, “The joy was to provide a home and a permanent family for these kids.”

Ashe said his experiences with Downey Side provided him with the experiences that spurred his initial run for sheriff in 1974.

Downey Side’s mission office is at the Church of the Blessed Sacrament in New York City, with additional offices at St. Uriel’s Episcopal Church in Sea Girt, NJ and at the Children’s Study Home in Springfield.

To learn more, and to buy the book, go to https://downeyside.wordpress.com/