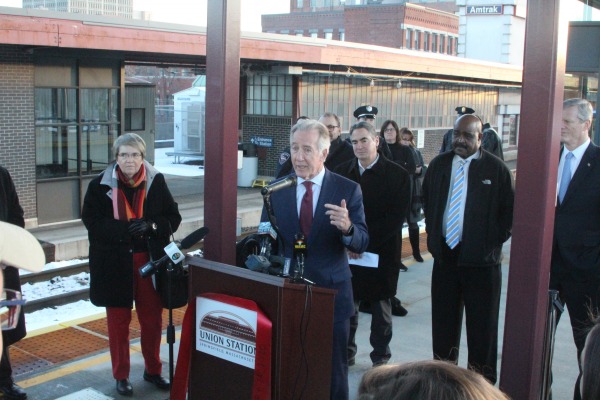 Congressman Richard Neal addresses the people gathered for the announcement of the completion of the new rail platform at Union Station.
Reminder Publishing photo by G. Michael Dobbs

SPRINGFIELD – If the people attending the press conference introducing the new rail platform at Union Station were expecting more news about east-west passenger rail service, they might have been disappointed.

Gov. Charlie Baker said the completion of the new platform at Union Station represents part of the $80 million invested in the rehabilitation of the historic train station.

“This platform is one more piece of the puzzle,” Baker said. He credited Congressman Richard Neal, who was also in attendance, as being a “huge champion” in the redevelopment of Union Station.

He stopped short of endorsing the concept of additional passenger rail service.

Baker made his remarks at a press conference announcing the new platform on Jan. 24. Mayor Domenic Sarno also joined him.

Baker did note the upcoming MassDOT report on the six possible plans for establishing passenger rail linking Pittsfield, Springfield and Boston as “the first detailed options analysis on east-west rail that’s ever been done.”

He said that doing the options analysis is the first step in determining the viability of the idea.

“I’m one of the guys who think most things are one step at a time. I try to not to get too far ahead of myself on that,” he said.

Traffic congestion and climate change are top of mind topics in Boston, and when asked if additional passenger trains are part of addressing climate change in the Commonwealth, Baker responded, “I certainly think that over time alternatives have to be made available and are absolutely part of the answer, but the thing I really interested in doing is putting together this multi state coalition around transportation and climate. We will continue to talk to our colleagues in 10 or 11 other states, taking about 70 million people and 50 million vehicles. I think in the long run the more we can do to work on this stuff regionally, the better off we are going to be.”

The new platform is raised so passengers do not have to step up or down, entering or departing the train. There is also a new elevator to accommodate anyone with mobility issues. It is accessible from the tunnel section of the transportation complex.

Neal was the leading force behind the renovation of the 1927 building that had been vacant and unused for about 40 years. He noted in his remarks Union Station – which is also an intercity bus station and the hub for the Pioneer Valley Transit Authority – the station is now at 72 percent rental capacity and that ridership numbers from CT Rail, which operates a commuter line into the city, are good.