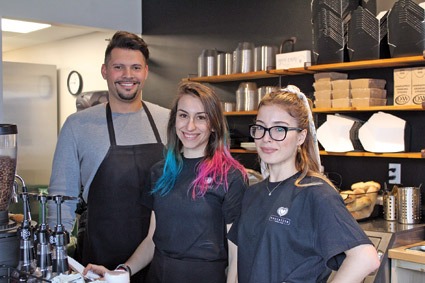 SPRINGFIELD – Ayse Karaaslan grew up in the food industry. Her family opened Pizza Works in 1995 on 459 Dickinson St. in Springfield, so many days of her childhood were spent working in the restaurant.

Karaaslan told Reminder Publishing as a result, she spent a lot of her childhood and teenage years wanting to get away from the food service industry.

“When I was in it, I always wanted to run away from it,” she said. “So after high school I was like, ‘I want to have a career, I want to have a title. I don’t want to be in the food industry.’”

Years later, though, she found herself back in the industry and opening Socialite Coffee Bar at 1516 Allen St. in Springfield.

She left Springfield after high school and attended Suffolk University in Boston where she studied international and public relations. Karaaslan attributes the time she spent traveling the world in college for igniting her passion and love for coffee and cafes.

“I love going to coffee shops when I travel. That’s the first thing I do is look for local coffee shops and I realized that was my passion,” she said. “That’s what encouraged me to travel, and what I loved about these cafes is the cozy feelings, the welcoming, the smell of cinnamon and sugar, and just the warm atmosphere. I felt like I was home wherever I went.”

An opportunity to work for Coca-Cola brought her back to Western Massachusetts, but she said she still didn’t feel fulfilled with her work.

During her time with the company, though, she was able to develop a business plan for the cafe of her dreams. Shortly after, she quit her job at Coca-Cola and went back to working at Pizza Works. This time, she said, her outlook on the food industry was completely changed.

“I went back to Pizza Works and I was so happy there. It was insane, my mood changed completely. I was so sure of this cafe thing,” she said. “I was like ‘I want to be back in the food industry, I am so happy.’ I was working day and night. That’s the point where I was like ‘I’m sure, this is it, I know I can do it.’”

From there, she presented her business plan to her family, who she said “were fully supportive of my decision.”

She said her whole family, including her sisters, one of whom is an interior designer and the other who is a paralegal, helped her immensely leading up to the opening of the coffee bar.

“I had all the resources right under my fingertips,” she explained. “My entire family, my uncles, were able to pitch in and give me some sort of advice, but my sisters hands down helped me put this thing together.”

Nearly everything in the cafe, including sandwiches, pastries and syrups for drinks, are made in house, something Karaaslan said she put a lot of thought into.

She said, “I’ve been to Iceland, Barcelona, Amsterdam, everywhere. I’ve been so many places, and what I did was when I went to all those cafes I made a list of what I thought was missing and what I wanted in my cafe. So put them all together and this is what happened.”

Socialite began business with a few days of soft openings, but has since expanded to their regular hours. Karaaslan said since opening their doors on Jan. 14 she’s gotten “amazing feedback,” but is “taking it day by day.”