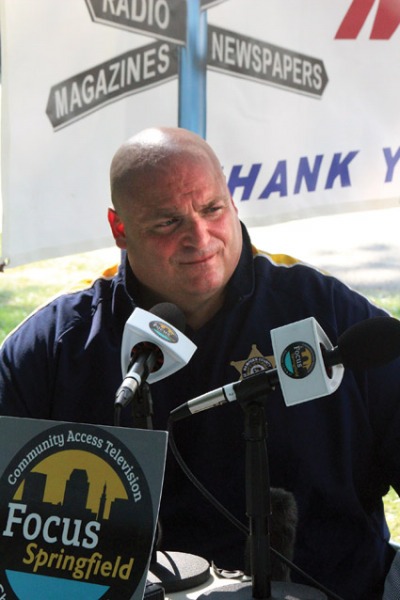 Once again there was a conversational mosh pit at which candidates, elected officials and those fascinated by politics rubbed elbows while hoisting a beer or eating a cheeseburger.

This is the opportunity for a unique form of face time – at once part business as people were looking for votes and support and informal as well. It’s not often elected officials feel relaxed enough in a public setting to have an adult beverage.

Cocchi told Reminder Publishing and FOCUS Springfield he expected between 750 and 900 people to attend the event.

“I’m so overwhelmed, so humbled,” Cocchi said of the turnout.

There were a number of opposing candidates who were working the room – that is the outdoor pavilion area of the Elks Club – Secretary of State William Galvin and his opponent Josh Zakim; Register of Deeds candidates Marie Angelides and Cheryl Coakely Rivera; state Senate candidates James Welch and Amaad Rivera; State Rep. Angelo Puppolo and Donald Flannery; Alison Werder who is facing off with State Rep. Brian Ashe; and Congressman Richard Neal and Attorney Tahirah Amatul-Wadud.

Surprisingly neither of the Democrats vying for their party’s slot on the gubernatorial ballot – Jay Gonzalez and Bob Massie – was in attendance. Lt. Gov. Karyn Polito did come and Cocchi escorted her through the crowd.

Over a nearly three-hour period this reporter interviewed as many candidates as he could. The complete interviews will be aired by FOCUS Springfield and put on-line. Not every candidate could be interviewed.

Ashe said that he has had good response form voters in his district for his reelection efforts and the issues constituents have spoken about have included jobs and public safety. Werder noted that some people think its “still early” in the campaign as the lection is on November, but she has been campaigning to build name recognition and to meet voters.

She said that Western Massachusetts is at a disadvantage as unlike other states both the political and economic center of the Commonwealth is in one city. “We need stronger representation,” she asserted and added the local delegation should be working together and working with the governor to make progress for the region.

Independent Donald Flannery, who is challenging Puppolo, said he had been a life-long Democrat but left the party disagreeing with a number of policies such as immigration. He said he entered the race after observing how Puppolo has voted and was motivated as well when the Legislature voted itself a pay increase.

He hopes to debate Puppolo and said he would even debate “an empty chair.”

In an unusual primary race for a position about which many voters know little, Galvin is facing a challenger in Josh Zakim. Zakim said he believes his candidacy is in “a strong position,” has positioned himself as a progressive with an emphasis on increasing voter registration through various reforms – reforms he asserts Galvin is opposing.

He noted the Secretary of State has many responsibilities – running elections are perhaps the best known – but the office also oversees the Massachusetts Historical Commission and the Historic Tax Credits program. Zakim would like to see that program help build more afford housing across the state.

Galvin was quick to reel off the many accomplishments during his 23 years in the office. He charged that Zakim was misrepresenting his positions on voter registration and was in favor of same day voter registrations. He was proud of the work he has done in the financial services part of the office and has returned to Massachusetts residents some $50 million.

Galvin also noted with pride that by keeping paper ballots Massachusetts has avoided the hacking problems of electronic voting machines.

Treasurer Deborah Goldberg was also in attendance and she noted she does not believe the MGM Springfield and the casino planning to operate in Everett will negatively affect state lottery revenues. She said a study at the Plainridge Park slots facility noted indicated the state lottery benefitted from the exposure. MGM Springfield will be selling lottery product, she added.

What does concern Goldberg is the impact of increased on-line gaming, such as sports betting, on the state lottery. “We need an even playing field,” she said.

Welch said voters have been expressing optimism to him about the regional economy and have spoken to him more about what is happening in Washington, DC.

“People are at a point they don’t know what is going on,” he said.

Welch who is facing a primary challenge from Rivera said “my record speaks for itself” and that his goal has been to brings as many resources back to the district. Angelides said the Hampden County Registry of Deeds has good customer service and runs well, but if she were elected to register she would do much more in spreading information about the registry throughout the county, educating the public about deeds and liens.

“It has a very important function,” she said of the office.

Coakley-Rivera readily admitted that many people don’t know very much about the Registry of Deeds and has proposed educational offerings as well. With a November election for the position, she added campaigning has been “a great experience” and that the race is a “marathon.”

Wadud’s campaign against Neal has not only attracted regional coverage but international coverage, but she said her primary focus is, if elected, to take care if needs of the district. She noted that many people are “really struggling” and the First Congressional District has a high rate of unemployment as well as issues with access to transportation and broadband.

The overwhelming issue that concerns the voters she has met is healthcare and many have advocated Medicare for all, which Wadud supports.

If elected she said she would be “approachable and accessible.” She added, a Congressional representative has to have proximity to the people.

Wadud again said she is ready to debate Neal and is hoping to finalize two debates.

“It’s frustrating when democracy is being denied,” she said.