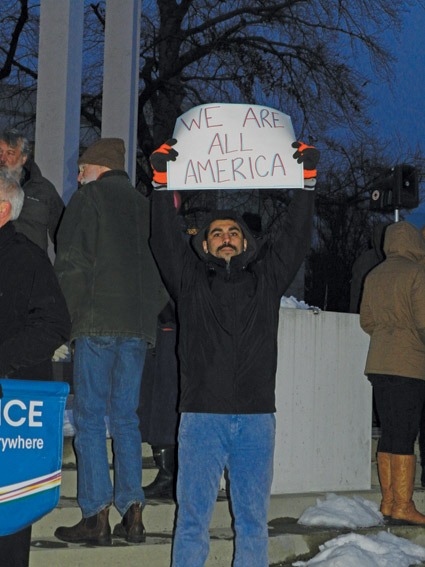 One protester at the rally at the Federal Courthouse in Springfield on Feb. 3 expressed his views on the immigration issue.
Reminder Publications photo by G. Michael Dobbs

SPRINGFIELD – About 100 protesters gathered at the Federal Courthouse on Feb. 3 to protest the immigration policies of the Trump Administration, the second such rally in Springfield that blended comment against the Muslim travel ban with the issue of defunding “sanctuary cities” that assist and harbor illegal immigrants.

The protestors held signs that read, “Muslim community we welcome you” and “First they came for the Muslims and we did speak up – resist the darkness!”

In what has become a fast-moving story, Western New England University School of Law Professor Harris Freeman updated Reminder Publications on what was happening.

The fate of the executive order may ultimately rest on a decision by the Supreme Court, Freeman said.

President Donald Trump signed an executive order on Jan. 27 that would keep vetted refugees and immigrants with visas from Iran, Iraq, Syria, Sudan, Libya, Yemen and Somalia from entering the country for 120 days.

The lawsuit, Freeman said, challenges the constitutionality of Trump’s executive order, especially because it favors refugees who are Christian over others.

The restraining order would give the courts time to put the executive order on trial and reinstates the status quo of those approved immigrants and refugees, he said.

The Justice Department filed an appeal against Robart’s restraining order to the 9th Circuit Court of Appeals that would lift the order. On Feb. 7 that court is now considering that appeal.

The decision the Justice Department wants is not on the legality of the executive order, but rather on whether or not Robart acted properly, Freeman said.

Depending upon the decision, Freeman said the Justice Department could go to the Supreme Court for a ruling or the case could go back to federal court.

If there is a trial on the substance of the order, the issue may still go to the Supreme Court, Freeman said.

If the issue of the stay against the order goes to the Supreme Court, Freeman said the request to review it could go “relatively quickly.”

Freeman suggested that those interested in the case go to the website for the 9th Circuit Court of Appeals (www.ca9.uscourts.gov) to follow the progress. There are Amicus Briefs and Motions from Massachusetts, Pennsylvania, New York, California, Connecticut, Delaware, District of Columbia, Iowa, Illinois, Maryland, Maine, New Mexico, Oregon, Rhode island, Virginia, and Vermont that support the stay of the executive order.

Those states maintained they have been harmed by the travel ban.

There is also the same legal action supporting the executive order for Citizens, United, Gun Owners Foundation, Conservative Legal Defense and Education Fund and other groups.

The website also has a link to the live streaming of the oral arguments.

Freeman noted the issue of the travel ban and the defunding of “sanctuary cities,” while two separate issues, are linked in a discussion about the potential “over-reach” of the powers of the executive branch.

The decision to ban travel by Muslims – and not Christians – may be a violation of the First Amendment, Freeman said.

"The larger political/emotional link doesn’t address to how this gets politically sorted,” Freeman noted.