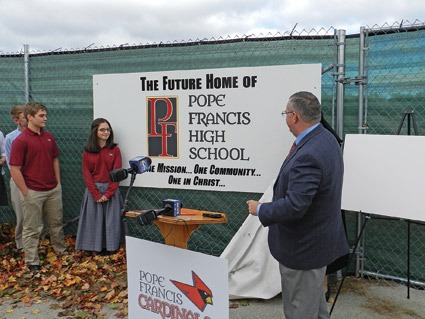 He made that statement after the unveiling of a sign on the Surrey Road site of the former Cathedral High school at a press conference eon Oct. 30.

He stressed the images were just conceptual at this point and final.

“You work in a process when you do this work,” he said.

When asked when a ground breaking is expected, he told Reminder Publications he would expect “something in the ground” sometime between April and June next year, probably closer to June.

“Things are moving he said, adding there has been a Request for Proposals for a construction manager at risk and the diocese is looking to hire a project manager.

Sr. Andrea Ciszewski, FSSJ, superintendent of schools, filled in for Bishop Mitchell Rozanski who was ill. She said the search for a head of school is underway and the staff and faculty of Holyoke Catholic and Cathedral high schools are working to merge the curriculum of both schools in anticipation of the combination next fall. The transition team is also continuing its works, she added.