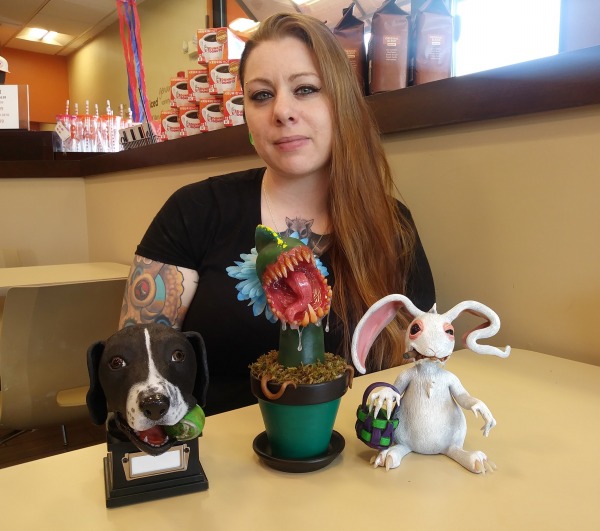 SPRINGFIELD – A plant sits in its terracotta pot. Its roots have grown unchecked and begun to snake out over the edge. A thick green stem stretches up and arches into an open mouth, complete with a thrashing tongue and drool dripping from its sharp teeth.

Jaed Demers of Springfield creates art that scares and delights at the same time.

“I’ve loved horror stuff since I was a kid. I’ve just always been drawn to it,” Demers told Reminder Publishing.

Demers’s clay sculptures are both realistic and fantastical. Her plants are a crowd-favorite, she said, but she’ll sculpt anything she can imagine.

“I see something and it triggers an image in my head and I want to see it in real life,” said Demers.

She also sculpts the likeness of deceased pets as memorials. Demers is dedicated to realism in her memorial pet heads and asks the owners for as many pictures as possible to capture a lifelike image.

Although Demers has been drawing her whole life, she began making three-dimensional art in 2014 when she saw sculptures at a tattoo show and decided to try it. Aside from the sculptures, Demers also creates latex masks, airbrushings, and paintings.

All of Demers’ art is original, she does not do replicas. The artist said she enjoys showing people things they've never seen before. She does take custom requests, though.

“Someone might tell me, ‘I want a plant with teeth and bat wings,’” Demers gave as an example. But if someone asks her to create something that isn't her style, she generally won't.

“I don't want to do something I don't enjoy,” she said, especially because it takes her so long.

When Demers creates a sculpture, she spends hours kneading, shaping, and carving the polymer clay. Once she is happy with the design, the sculptures must be baked for four to five hours. Then, everything is hand-painted with multiple coats to get the desired shading and realism.

A nine-inch plant takes about nine hours and costs approximately $100 to $120. Something symmetrical takes longer to get right. Her rabbits, for example, take about 13 hours and go for about $150.

Memorial pet heads take the most time and cost the most because of it. On average, a pet head takes Demers roughly 16 hours to create. They cost between $200 and $300.

While sculpting and painting aren’t physically exhausting, Demers said, it is mentally exhausting. Because she pays such close attention to detail, there is a lot of eye strain.

She will often work non-stop on a piece of art and is sometimes up until 4 a.m. because “I don’t want to break my flow,” Demers said.

Demers creates one or two original sculptures per week but she also makes casted sculptures. To do that, she makes a mold of something she has already sculpted so she can recreate it exactly. Those take much less time.

The largest piece Demers ever made was a 17-inch tall plant, but that doesn’t mean it was the most expensive. She explained that her smaller pieces cost about the same as the larger ones because it takes more time to sculpt small details.

Demers admits her audience is fairly niche. Her sculptures sell best at horror and tattoo conventions and she said tattoo artists are her biggest customers.

While Demers was a full-time sculptor for a couple of years, she found it was hard to make ends meet. The clay she works with is expensive at approximately $20 per pound. For now, she now has a second job at a PetSmart, but one day she would like to be able to sell enough of her art that she could bring her imagination to life full-time.