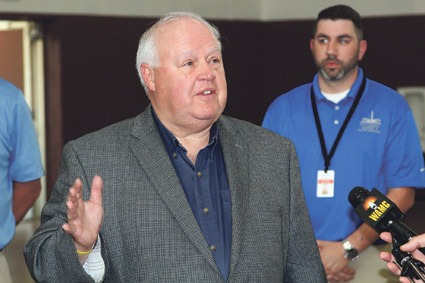 SPRINGFIELD – On June 22, the city announced more than $17 million in renovation projects for its schools.

Standing on a gym floor at Duggan Academy slated to be replaced this summer, Mayor Domenic Sarno, Superintendent Daniel Warwick and other city officials praised efforts to improve the district’s physical facilities, utilizing city funding as well as $13.7 million in support from the state through the Massachusetts School Building Authority.

“You don’t have to have Taj Mahal to have a great school, but it does help to give a good physical environment for our teachers and our students, our staff and our families,” Sarno said.

Sarno noted that the average age of the Springfield school building is 55 years old and the city has been assertive in seeking funding to improve the learning environments for the city’s youth.

“During my tenure, we’ve been able to garner $650 million from the Massachusetts School Building Authority,” Sarno said.

Warwick thanked Sarno and the City Council for their support in the city’s efforts to improve the schools’ physical plant.

“When we need a project done, he’s always been able to find the funding even in the most difficult financial times,” he said.

Warwick also said this year’s group of projects keeps them on a “similar trajectory” compared to the number of improvements made last year.

He also acknowledged the work would impact summer school programs.

“We run summer programs in every building, but what we do is where we have major projects going on in the summer, those buildings will move their programs to other buildings to work around it,” he said.

Forty projects set to take place during the summer.

“There’s at least 15 schools that have work being done and different degrees of work,” Warwick said.

Duggan Academy, which recently converted from a middle school to a grades 6-12 model as part of the Springfield Empowerment Zone Partnership, is set to receive the lion’s share of city funding – $1.2 million of $3.6 million. Projects include a new fire alarm system, auditorium improvements, flooring installation, restroom upgrades and the aforementioned gym floor replacement.

Warwick also noted the fundng announcement comes on the heels of an agreement between the city and the Springfield Education Association, the teachers’ union.

Springfield teachers operated without a contract during the 2016-17 school year; the previous contract expired on June 30, 2016. On March 10, teachers at several schools performed a standout before a professional development session to raise awareness for their need for a contract.

The agreement, which was approved by teachers by a 90 percent vote and unanimously supported by the School Committee, was the result of an 18-month negotiation.