Is this the end of the hockey era in Springfield? 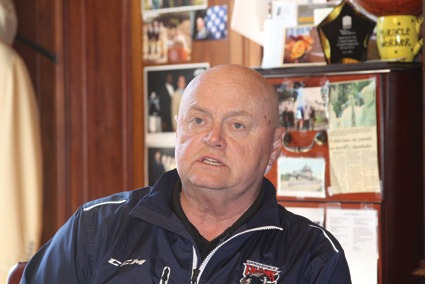 Former Springfield Falcons President and Director of Hockey Operations Bruce Landon said he would work to bring another AHL team to Springfield, but there was a very short timetable to make that happen for the 2016-17 season.
Reminder Publications photo by Chris Maza

Landon, Sarno pledge to do what they can to keep AHL hockey in Springfield

SPRINGFIELD – On April 19, a sign on a Springfield Street corner still read “Falcons Way” and on the side of the MassMutual Center a sign still declared, “Welcome to the Nest.”

But by the afternoon that day, those were just a few of the last remnants of Springfield Falcons hockey.

The Springfield Falcons put to bed rampant speculation about the fate of the team with a brief announcement confirming a sales agreement between owner Charlie Pompea and the Arizona Coyotes. The Coyotes intend to move the team to Arizona where it would play its games at the Tucson Convention Center.

While the agreement is contingent, in part, upon approval by the Board of Governors for the AHL, the team stated it would be mailing refunds to those who had purchased 2016-17 season tickets and the team’s Twitter account was shut down by mid-day.

If the AHL approves the agreement at a meeting on May 10 the league, whose offices are located at One Monarch Place, would not have any teams operating in the state in which it is headquartered for the first time since the 1950s.

Late former Springfield Indians owner Eddie Shore moved the team to Syracuse in 1951, but returned the franchise to Western Massachusetts in 1954. It would also mark the first absence of AHL hockey in the city proper since the Springfield Kings moved from the Eastern States Coliseum to the Springfield Civic Center in 1972.

Representatives from the AHL did not respond to a request for comment as of press time.

Pompea bought the team from its previous ownership in 2010 in a deal brokered by former president Bruce Landon, who spent decades trying to keep hockey alive in the City of Homes.

Pompea spoke exclusively with the local daily paper and the team declined to provide any additional media availability.

When asked to speak with Pompea regarding his decision to sell the franchise, Manager of Communications Andy Zilch responded, “[Republican columnist] Ron Chimelis has our official statement. Nothing further is being stated at this time.”

While neither spoke with Reminder Publications, Pompea and his daughter, Sarah, president of the club, routinely expressed interest in keeping the team in Springfield, but made no promises.

In 2013, when announcing the creation of the Falcons Charitable Foundation, Charlie Pompea said as a successful businessman he “always jettisoned our losers and invested in our winners,” adding he had been approached about selling the team, which would have resulted in its relocation.

Sarah Pompea said the organization was “committed to keeping the team in the city of Springfield as long as the city is committed to having us” when addressing rumors of the team’s departure in December 2014.

Landon, who was president of the team until 2014 and remained as director of hockey operations, cautioned against “painting Mr. Charlie Pompea as the bad guy,” reiterating the talking point that the owner wanted to make hockey work in Springfield.

The major cog in the establishment of the Falcons, Landon said, “This is my baby ... This is an emotional time for me, but I don’t live in the past and I don’t hold any animosity toward Charlie. For the last five years he put his money on the line and we just simply didn’t draw enough people to satisfy what he thought was necessary and I can’t say I disagree with him.”

Landon had routinely estimated the franchise required an average attendance of between 4,000 and 4,500 to remain viable.  Falcons have not seen an average of more than 4,000 come through the turnstiles since the 2002-03 season.

This year’s 3,108 figure was the worst in a league that reported record attendance. It was also the worst in Falcons team history and lowest by a Springfield AHL franchise since the 1979-80 Springfield Indians.

The Falcons and the Coyotes just completed the first year of a three-year affiliation agreement, which was announced just prior to the end of the 2014-16 season.

The Coyotes are following a current trend in which NHL parent clubs have either moved farm teams they own or purchased their affiliates in order to bring them in closer proximity to the NHL club. The Worcester Sharks moved to San Jose as part of a league-wide shake-up after the 2014-15 season through which a Pacific Division was formed.

So in some ways like 1994 when Landon helped keep professional hockey in Springfield, he is again looking for a way to keep AHL hockey in one of the league’s charter cities.

“In a way, this is like déjà vu all over again,” he joked.

In an impromptu joint meeting with the press and Landon hours after the sale was announced, Springfield Mayor Domenic Sarno said, “Bruce and my administration will have a ‘never say die’ attitude” in attempting to attract another AHL team to Springfield.

“I’m not going to walk away without trying everything I can do to make sure that hockey stays in the city of Springfield,” Landon said.

He also stated his belief that while Pompea made a business decision to sell the team, it does not mean a franchise cannot be fruitful in Western Massachusetts.

“It’s a challenging market, but it’s one that I believe with control of expenses and driving revenues in the right way, you can be successful here,” he said.

He indicated phone calls had been made and conversations started regarding potential investors. When asked specifically about MGM Springfield’s involvement, he said there was some discussion earlier that day, but “nothing came out of it yet.”

Landon also cautioned that securing a franchise would not be a task easily completed.

In 1994 when Peter R. Cooney sold the Springfield Indians, who were moved to Worcester, Landon and Wayne LaChance were able to put together a group of investors who were willing to purchase an AHL expansion franchise. Landon pointed out that the league currently doesn’t sell expansion franchises.

He added approximately half of the teams in the AHL are owned by their NHL affiliates – including the New York Rangers, which own the Hartford Wolfpack and the New York Islanders, which own the Bridgeport Sound Tigers. These facts greatly diminish the chances of finding a partner willing to relocate to Springfield.

“You could have the wealthiest ownership group in the world together, but you have to have something to buy,” he said. “At this moment, I know of no other franchises for sale. That doesn’t mean one will not be for sale.”

Landon also conceded that due to timelines and other factors such as commitments teams might have with NHL partners, there is a distinct possibility that the MassMutual Center staff would not have to lay any ice for hockey for the 2016-17 season.

When discussing the possibility of an ECHL franchise to replace the Falcons in the same fashion Worcester and Manchester, NH, filled a void left by their former AHL teams, Landon spoke highly of the league, but said, “First and foremost, we want to be an AHL city. No. 1 priority is putting an American Hockey League team in Springfield.”

Sarno said having an AHL franchise in the city is an important economic driver for Springfield, specifically the downtown area restaurants and pouring establishments. Using this year’s low attendance figure as a barometer, he said over the course of a home schedule, the Falcons bring approximately 120,000 people to the downtown corridor.

In addition, 15 full-time employees were relieved of their positions. Landon added a number of part-time gameday operations staff would also lose those jobs and Sarno pointed out many workers associated with the MassMutual Center would lose income opportunities.

Landon and Sarno both also reiterated a common theme throughout the years – in the event a team is relocated to Springfield, a stronger season ticket base would have to be established to remain viable.

Landon said while Springfield remains a strong market from the aspect of tradition and devotion from its core fan base, the ticket sale dilemma has remained a multi-faceted stumbling block. He said corporate support in the area rivals that of some major league professional franchises, but that alone is not enough to recoup the losses resulting from weak ticket sales.

He dismissed the idea that proximity to the parent club was the primary issue preventing fans from coming to games, pointing out attendance wasn’t helped by prior Springfield affiliations with the Hartford Whalers and other East Coast teams.

“Everybody wants to see us affiliated with the Boston Bruins; that’s not going to happen,” he said.

He also said winning has not necessarily equated better gate, noting not only the fact that recent back-to-back division titles failed to spike attendance, but also that after the Springfield Indians won back to back Calder Cups in the early 90s, ticket sales were stagnant.

Sarno equated the situation with Springfield hockey to that of any struggling local business that people only seem to notice when it disappears.

“People say, ‘I love that corner drug store.’ Well, when’s the last time you’ve been in there? ‘Oh, I don’t go there anymore,’” he said.

The mayor also called hockey in Springfield “affordable family fun.” While affordability varies from household to household, Springfield’s ticket prices are comparable to other AHL franchises in the Northeast.

Sarno also said he hoped people would realize the area is safe for families.

“We’ve worked very, very hard to make sure it was a very safe venue with our police,” he said. “There were never any issues down there … That’s not an excuse anymore.”