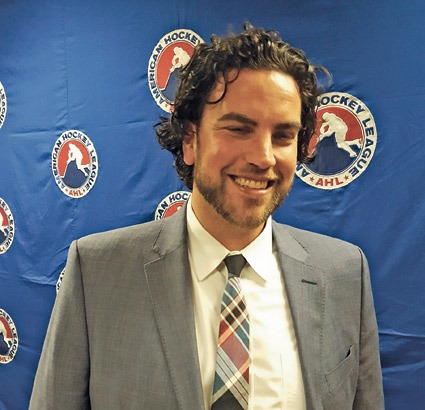 SPRINGFIELD – This past winter in San Antonio, TX, the temperature dipped below freezing all of four times. On Jan. 30, it was nearly 80 degree outside; yet the hockey team drew more than 7,000 fans to a Saturday night game against San Jose.

Hockey works in San Antonio. Nathan Costa is proud to say he had a hand in that.

Referred to by franchise co-owner Paul Picknelly as one of the AHL’s “rising stars,” Costa has made a name for himself by helping franchises and the league boost their business effectiveness.

Making hockey a go-to attraction in a city where basketball is king was the Springfield native’s first experience in pro hockey. Working in sales and marketing for more than four years, he was part of a team that was recognized by the American Hockey League (AHL) for its success in boosting its ticket sales and was one of the organization’s top revenue generators.

He parlayed that success into a position with the AHL, working his way to an executive position in which he helped the league realize steady growth, including an all-time attendance record.

Now the Cathedral alum sets his sights on making his hometown team a success. As the executive vice president, Costa will oversee the day-to-day operations of the franchise, including marketing, sales and community outreach.

“I was pumped up, to be honest,” Costa said when asked to recall his reaction to receiving the offer to run the team. “I had spent the last six and a half years [with the AHL] working to get to this place. I’ve worked with the franchise quite a bit over the last little while and I saw so much opportunity here in the Springfield area. I want to make this work for Springfield.”

Unlike most professional franchises, the AHL consults with and assists its franchises with marketing, promotion and sales. That aspect was one in which Costa was immersed in the league office, working with all 30 franchises on an individual basis, and one from which he felt he would be able to draw considerable knowledge and experience.

“There are a lot of markets in the Northeast that are thriving. The Syracuse Crunch have done a fantastic job in marketing promotions and sales,” he said, adding the Utica Comets, Rochester Americans and Hartford Wolf Pack have all utilized successful strategies to maintain successful and competitive from a business standpoint in a changing league.

“The fact is Nate has been solely responsible for working the 30 teams throughout the country promoting hockey within their region. He knows the best of the best and he’s going to take those best of the best, bring them to Springfield and adopt those programs,” Picknelly said.

Costa’s strategy is built upon four pillars, he explained – sales and marketing, improving the game day experience, increasing community engagement and creating “a winning culture” in the team office.

“The quality of the hockey is so good that when people come to the building, it’s going to sell itself,” he said. “We’ve just got to do a couple of things on the marketing side that will get us there and get people in the seats.”

Costa noted the addition of Chris Thompson, former senior vice president of the now-defunct Falcons organization, would be critical in augmenting the ticket sales aspect of the business. He also mentioned the team is exploring new options for ticketing policies, including the possible development of programs through which season ticket holders receive additional benefits.

Former Falcons President and Director of Hockey Operations Bruce Landon was also retained as a consultant.

“We’re not hockey guys,” Picknelly said of the ownership group. “I have never been involved in operating a hockey team. Bruce is coming on board to assist us with any hockey questions that we have. We couldn’t have done it without him and we’re delighted to know he’s staying with the team.”

For Landon, the recent events through which hockey returned had a great deal of personal significance.

“It’s very rewarding. When the Falcons did get sold and moved, it was emotionally tough and draining because the Falcons were such a big part of my life,” he said. “But seeing hockey stay here is gratifying and it makes be proud to be part, for a short period of time, of the new regime and I think it’s going to be very successful.”

The regime of which Landon spoke includes a group of local business owners and executives who banded together to purchase the former Portland Pirates franchise shortly after the relocation of the Falcons was announced. In addition to Picknelly, president of Sheraton Springfield/Monarch Place, the group was made up of Fran Cataldo, president of C&W Realty Enterprises, Michael Wallace, principal of C&W Realty Enterprises, Frank Colaccino, CEO of The Colvest Group, Dinesh Patel, owner of Hampton Inn Springfield, Vidhyadhar Mitta, owner of Quality Inn Chicopee, Attorney Frank Fitzgerald of Fitzgerald Attorneys at Law, Dave Fontaine Sr., president of Fontaine Bros. Inc. and Local Dunkin Donuts franchisees Peter Martins and Derek Salema.

“I’m a firm believer that Springfield’s time is now. I believe we are on the verge of a renaissance for our community and now is not the time to lose professional hockey,” Picknelly said.

During the press conference, it was noted that Ted Hebert of Teddy Bear Pools and Spas and Tony Caputo, owner of Red Rose Pizzeria, had recently joined the fold as investors.

MGM Springfield is not directly involved with the ownership group, but will maintain a strong marketing agreement with the team.

The team also announced it would unveil its new name and logo on June 15. Picknelly applauded the community for participating in a naming survey, which drew 2,600 responses in a 2 ½ day period.

The suggestion received most often was the Indians, which Picknelly said would not be used in the interest of political correctness. The Isotopes, a hat-tip to the baseball team in the fictional town of Springfield in the Fox television show “The Simpsons,” was also widely supported, but was not selected. The team name will also have no relation to casinos or gambling.