Springfield honors those who served 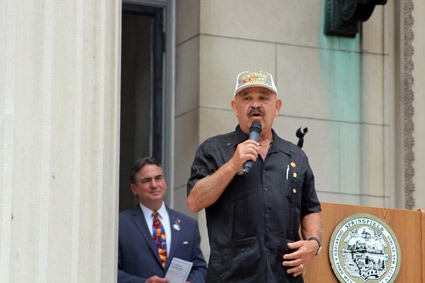 SPRINGFIELD – The city of Springfield observed Memorial Day with the laying of wreaths on the monuments to the city’s war dead and honored specifically the residents who are veterans of the Vietnam War.

In 2008 the Department of Defense created a program to honor those veterans and to note the 50th anniversary of that conflict. In 2012 President Barack Obama extended the celebration of those veterans through Veterans Day 2025.

After Mayor Domenic Sarno read a proclamation for Memorial Day, Springfield’s commissioner of Health and Human Services, Helen Caulton Harris, read the proclamation delivered by Obama in 2012 about the anniversary of the Vietnam War. The document read in part, “While no words will ever be fully worthy of their service, nor any honor truly befitting their sacrifice, let us remember that it is never too late to pay tribute to the men and women who answered the call of duty with courage and valor. Let us renew our commitment to the fullest possible accounting for those who have not returned.”

Gumersindro Gomez, the Massachusetts president of the Vietnam Veterans of America, noted Memorial Day is “not a celebration, but a sad day for us” and noted the men and women who went to Vietnam to serve their country and never came back.

He said, “Every one of us has our stories and not everyone tells their stories unless it’s to another Vietnam veteran.”

Gomez said the Healing Wall, a half-size replica of the Vietnam War Memorial in Washington D.C., will be on the grounds of the Eastern States Exposition in West Springfield from Aug. 18 through 21.