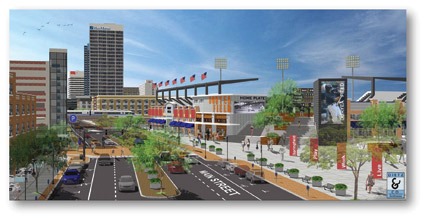 An artist’s rendering reflecting the concept of a downtown baseball park was included in Springfield’s “Vision 2017” presentation, before talk of the Pawtucket Red Sox moving to Springfield began.
Reminder Publications submitted photo

While a recent media report that Springfield officials were in talks with the ownership of the Pawtucket Red Sox worked many into frenzy, Kennedy and the mayor cautioned that City Hall was at the beginning of what would be an extensive process that could take up to 18 months.

“Like we’ve done with other projects, we’re going to roll out the red carpet, let them know we’re interested, but then we’re going to set the table for logistics to see if it makes sense,” Sarno said. “We ran a hotly contested competition [for a casino] and were commended for how we ran that and we’ll do the same here.”

“MGM Resorts was pleased to introduce Mayor Sarno to Larry Lucchino, owner of the Pawtucket Red Sox, at the recent MGM Springfield-sponsored Globies Award­­­­s show. Nothing would make us prouder than to be part of the catalyst for bringing this storied franchise to Springfield, and AAA baseball to the region,” Bill Hornbuckle, president of MGM Resorts International said in a statement.

According to Sarno, Lucchino told him he “liked the way we do business.”

When queried about the potential move, Bill Wanless, vice president of Public Relations for the Pawtucket Red Sox said only, “As we said in September, the club will now devote its energy to preparing for the 2016 season in Pawtucket at McCoy Stadium, and will continue to listen to ideas and plans brought to us regarding the long-term future of the franchise.”

Kennedy explained the first step would be a feasibility study, which would look at, among other things, cost, land assembly, infrastructure, and preferred sites.

“It would take a few months to do it correctly. It could take three to six months,” he said.

Talk of a baseball team returning to Springfield for the first time since 1965, when the Springfield Giants played at Pynchon Park, is not new. In 2010, Sarno spoke of bringing baseball back to Springfield when the now defunct Pittsfield Colonials of the independent CanAm League played an exhibition against local college stars at the Forest Park’s Walker Grandstand. An artist’s rendering of a baseball stadium on Main Street was also included in the Office of Planning and Economic Development’s March “Vision 2017” presentation, which encouraged viewers to “dream big.”

Sarno explained a stadium built to AAA standards would need at least 11,000 seats and would require an estimated six to seven acres for the facility and an additional five to six acres for parking, which Kennedy said would most likely would have to be a structure, not a lot.

Sarno said the city has not concretely identified any sites on which a stadium could be constructed, but indicated interest in a North End facility, which would “anchor” that portion of the city and bookend the downtown corridor with the MGM Springfield casino anchoring the South End. With that location, the 400-space garage at Union Station could supplement the parking demand, Kennedy added.

Other locations are being considered and the possibility of a stadium at the old Pynchon Park site has been tossed around as well, Sarno said.

Sarno mentioned that in his work with other organizations, including the development of the Baltimore Orioles’ Camden Yards, Lucchino has proven to be an executive with an eye toward innovation. He also noted that a stadium could incorporate other businesses in a manner similar to Patriot Place, developed by Robert Kraft around Gillette Stadium.

Sarno and Kennedy both indicated the goal would be to make a stadium useful in multiple facets – attracting other events such as college baseball tournaments or concerts.

The major hurdle facing the city in its courtship of the Pawtucket club is more of a brick wall, however. With the Hartford Yard Goats set to open its first AA season in 2016, moving another Minor League Baseball team to Springfield would violate the league’s territorial regulations, which state that new home territories must have boundaries no closer than 15 miles from the boundaries of all other teams. Home territories are usually the county in which the stadium resides.

Requests for comment from Minor League Baseball’s front offices in St. Petersburg, FL, were not returned as of press time.

In this case, the Yard Goats would have to consent to allowing a stadium to be built because Hartford County abuts Hampden County.

Kennedy said of the territorial rules, “Those are issues we’ll address when we get to them.”

Hunter Golden, general manager of the Springfield-headquartered Valley Blue Sox said the territorial issue is makes it a nonstarter.

“I don’t know if there’s anyone who wants a baseball stadium downtown more or who has done more research into it, but I just can’t see this happening,” Golden said. “The territorial issue isn’t just an issue; it’s the issue. From that aspect, they’re out; Springfield’s not viable. It doesn’t matter what the level of play is. The Hartford baseball franchise would have to say, ‘It’s OK that you operate essentially in our backyard.’ Given the war for entertainment dollars between Hartford and Springfield, I would be very surprised if they would acquiesce to allowing a franchise that is bigger and has a greater need for corporate support and a potential to dip into their backyard.”

Sarno, however, had a more optimistic outlook and touted the potential for “cross matriculation” in the Knowledge Corridor between Springfield and Hartford. In 2017, 25 trains will travel between the Union Stations in Hartford and Springfield, Kennedy noted.

“There are 2.7 million people in the Knowledge Corridor district,” Kennedy said. “That’s a population the casino people used in their projections and the same applies for baseball.”

“Do I think Springfield can host Minor League Baseball? You bet. I’m just not sure AAA baseball isn’t a bridge too far,” he said. “I think people’s perception of AAA baseball, and what it is, is about 15 years behind what it actually is.”

Golden said the budget for a AAA team would dwarf that of the Springfield Falcons, and the size needed for an advertising base “would lap them many times over.”

He added, “The Falcons have struggled some years and have a great group over there that work their tails off the make it happen and they make it work. But multiply that kind of demand and needs to sustain that kind of franchise and I think it’s a little too much to bite off.”

Golden pointed to the situation in Great Britain as a cautionary tale. New Britain Stadium played host to the AA Rock Cats from 1996 to 2015, but the team was relocated to a $56 million complex in Hartford and became the Yard Goats, leaving an approximately 6,200-seat venue vacant. Owned by the city of New Britain, it cost $10 million to build with New Britain footing $2 million by issuing bonds.

Providence’s initial plans to have the Pawtucket Red Sox relocate included an $85 million stadium. However, the state legislature balked at the club’s proposal for $120 million in subsidies.

State Sen. Eric Lesser, who is a member of the Joint Committee on Tourism, Arts and Cultural Development, said while he supported the idea of a Springfield stadium, he would be concerned about the level of public commitment.

“I’d be very cautious about that,” he said. “I don’t think the direct construction should use public money, but if there’s infrastructure improvements or general improvements that could benefit everybody that could be done as part of the project, that might make sense. But don’t have enough specifics to know yet … we can’t get into a hypothetical [conversation] without knowing the details. ”

According to media reports, Worcester and New Bedford, which also have varying degrees of interest, said no public money would be used for a stadium.

Sarno also said the city’s decision on how it would move forward would depend on how much “skin in the game” the Red Sox and potential local investors would be willing to commit. Kennedy said the city had reached out to the private sector and there was significant interest in pursuing a stadium.

Lesser also said he had spoken with local business leaders and some state economic development officials, but the conversations were described as “very preliminary.”

With that said, Lesser said the fact there is discussion is a positive for Springfield.

“There’s excitement about it and I think what that shows is that our area is on the map; our area is growing,” he said. “New investment is coming to the Springfield area and all of these things are connected. When you see a new Union Station coming in, when you see the MGM project happening, when you see the CNR rail facility opening, when you see the improvements being made to the I-91 viaduct, when you see companies like Menck Windows opening in Chicopee just in the last few years, it creates a general feeling that there our home is dynamic and we’re a good place to do business and to attract visitors. That brings new opportunities to the Pioneer Valley. The potential of the PawSox moving here is an example of that.”