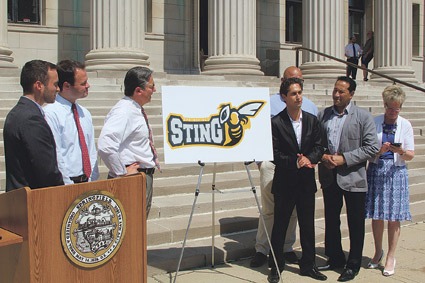 SPRINGFIELD – Professional basketball is slated to return to Springfield and the region with the newly announced Springfield Sting taking to the court in November for its opening game.

Owner Zach Baru, a teacher at Holyoke High School and resident of Longmeadow, made the official announcement on the steps of Springfield City Hall on July 22.

Baru said he has told his students in the business classes he teaches, “following your dream changes your life. I know what that is like.”

He told Reminder Publications that owning a sports team has been his dream.

The Springfield Sting will be part of the American Basketball Association. The league was revived in 1999 and has teams playing throughout the country. Baru noted the Sting will be facing teams from Boston, Providence, RI, as well as New York and New Jersey.

Baru said he has already started the process of building the team by attending a professional combine in New Jersey where players have the opportunity to meet with players and coaches. “There is exceptional talent throughout the Northeast,” he added.

Baru said several players reached out to him about playing in Springfield and expressed their willingness to relocate to the region.

Local tryouts for the team will be from 1 to 3 p.m. July 30 at American International College. Registration online at www.springfieldsting.com is required.

The first game is scheduled for Nov. 5 at 7 p.m. Baru said he is finishing contract talks to secure the home venue for the team.

The team’s composition should be determined next month and Baru said it would play a 20 game schedule – 10 home and 10 away games.

Dr. Stephen Sobel will be the team’s general manager and head coach. A local motivational speaker and authors, Sobel has also spent more than 40 years coaching collegiate and professional basketball.

The team and its games will be “focused on families,” Baru added.

Springfield Mayor Domenic Sarno praised the announcement of the team, while state Sen. Eric Lesser commended Baru for being a young person who is staying the in the region building a business.