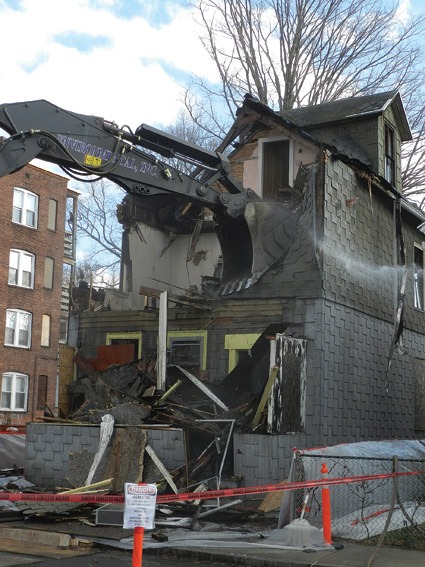 The demolition crew made short work of the house at 523 Union St.
Reminder Publications photo by G. Muchael Dobbs

SPRINGFIELD – The house at 523 Union St., across from the Dunbar Community Center, has been an eyesore for years, but no longer.

A demolition crew took the wood frame residence down on Jan. 28.

The city owned the building through tax title and had tried in the past to sell it to a developer for renovation.

Director of Disaster Recovery & Compliance Tina Quagliato said the house next door is also owned by the city, which wants to sell it.

Sarno said the process for the city to seize an abandoned property is a long one.

He noted the Union Street corridor has been “troubled with gang and drug activity.”

Sarno said, “it drove me crazy” to come to Dunbar Community Center and see the house.

He said the city would continue to be aggressive in dealing with such properties.

As far as the future of the property, it may be purchased by abutters or may be offered for as a space for a new single family home, Quagliato said.