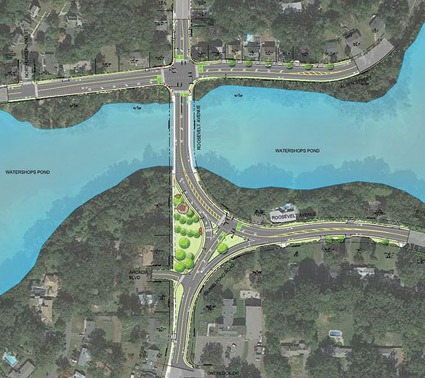 SPRINGFIELD – Renovations to the section of Island Pond Road where it intersects Roosevelt Avenue and the General Edwards Bridge are due to begin “sometime between April 15 and May 1,” according to Christopher Cignoli, director of the city’s Department of Public Works.

Cignoli told the 35 members of the East Forest Park Civic Association who gathered in the St. Michael’s Academy cafeteria on April 12 that design work for the revamped intersections was completed in August of 2016 and put out to bid in September of last year. He noted C & A construction of Ludlow was selected for the project last November.

The estimated $2 million renovations, which will be funded through a combination of state and federal monies, will help alleviate heavy traffic congestion in the General Edwards Bridge area during peak commuting hours, and will improve pedestrian safety at the intersections.

Cignoli said C & A has been awaiting completion of gas and sewer line work by Columbia Gas before proceeding with the project, which according to information on the DPW website, will create a three-way signaled intersection that consolidates all vehicle conflicts into one intersection, includes a southbound left turn lane on Roosevelt Avenue and provides new signal equipment to the Alden Street-Roosevelt Avenue intersection.

He anticipated work would begin with curb replacement on the Alden Street section, with construction to realign the Island Pond Road lanes and relocate the park containing the General Edwards memorial to begin in the summer when schools are closed and the traffic is lighter.

“Heavy construction work will be starting in the next three to four weeks,” he told association members.

The construction is expected to last until the end of the year.