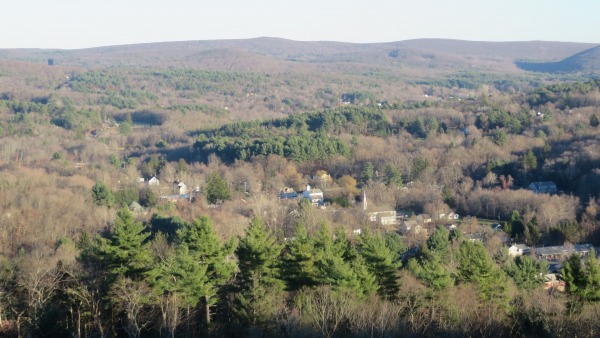 One of the views from the trails that run along Minnechaug Mountain.
Photo Credit: Minnechaug Land Trust

WILBRAHAM/HAMPDEN – One of the benefits to living in Hampden and Wilbraham is the hidden pockets of nature that lie within the towns. The four properties managed by the Minnechaug Land Trust offer space for people to go hiking, horseback riding, and snowshoeing, among other passive recreational activities.

The Minnechaug Land Trust is a 501(c)(3) non-profit organization which works to protect and promote open space and be a resource for information about conservation options.

“Hampden is a hiker’s paradise,” said Trail Steward Charles Thompson, “Twelve miles of hiking on 16 different trails on four mountains, that offer a variety of hiking terrain from flat to quite steep.”

The various trails offer opportunities for all levels of athletic ability, Thompson said. The easiest hiking areas that Thompson oversees is the Goat Rock Trail, a mostly level walk through the woods with a short 350-foot climb.

“Goat Rock has always been a popular place,” Thompson said, “During the pandemic there became even more people out there.” He said it offers “a nice view of the valley.”

The 35-acre preserve connects Memorial Park with Gerrish Park, both in Hampden. Though the trail isn’t a tough climb, there are two vistas that offer a view. Lookout Point is at the east end of the trail and the land’s namesake, Goat Rock, is at the west end.

For hikers looking for more of a challenge, Minnechaug Mountain offers three miles of marked trails, and plenty of unmarked ones, that run up the 908-foot mountain. Although there are several trails running in various directions, the most popular trail on the mountain is the Algonquin Trail.

Beginning near the Veterans of Foreign Wars (VFW) Post on Main Street in Hampden, the Algonquin Trail runs to the summit of Minnechaug Mountain, where Thompson said there are views to Hartford, CT and Westover Air Base in Chicopee. From there the trail can take hikers into Somers, CT. Other peaks for hiking include Pine Mountain and Mount Vision. The Algonquin Trail was originally cleared by boy scouts in the late 1960s, Thompson told Reminder Publishing.

The Minnechaug Land Trust purchased the mountain in two parts between 2001 and 2003. After purchase, ownership was turned over to the Town of Hampden. The 259 acres are now protected as town-owned conservation land.

One area of open space in Wilbraham came under the management of the trust through efforts of the town and the former owners. The land that is now Rice Nature Preserve was once owned by Jesse Rice of Rice Fruit Farm. He worked with the Town of Wilbraham, the trust and the Massachusetts Self-Help Program, to ensure the land would remain open space. The upper 150 acres of the property is owned by the town and is open to passive recreation. The other 90 acres were preserved as farmland under an Agricultural Preservation Restriction (APR).

The main access point for Rice Nature Preserve is located at the end of Highmoor Drive, however parking there is limited. Hikers can take the Highmoor Trail to the Rachael Phelps Trail. From there, several routes lead to the Sunrise Trail and the Sunrise Peak summit at 910-feet above sea level.

The smallest of the trust’s passive recreation areas, the McDonald Farm Nature Preserve is just 29 acres and is located near the center of Wilbraham off Washington Road. The land was formerly an active farm owned by Alton and Helen McDonald.

The main trail is Alton’s Way, which runs from the entrance to the preserve to Nine Mile Pond and the Cedar Swamp Trail, or to the Wilbraham Middle School. Several trails branch off to make for an afternoon of walking through the woods. As a mostly-flat area, the preserve also lends itself to cross country skiing and snowshoeing in the winter.

The Minnechaug Land Trust continues the work of clearing viewing areas and trails, as well as rerouting some existing trails on all of the preserves it manages. While the lands are open to everyone, there are rules regarding its usage.

“No motor vehicles [are allowed], but there’s no rule about mountain bikes,” Thompson said. “Some of the trails are used by people on horseback, but they’re not all appropriate for that.” Pets are allowed on the trails as long as they are “under control.”

To learn more about the Minnechaug Land Trust and  the conservation areas it manages, visit minnechauglandtrust.org