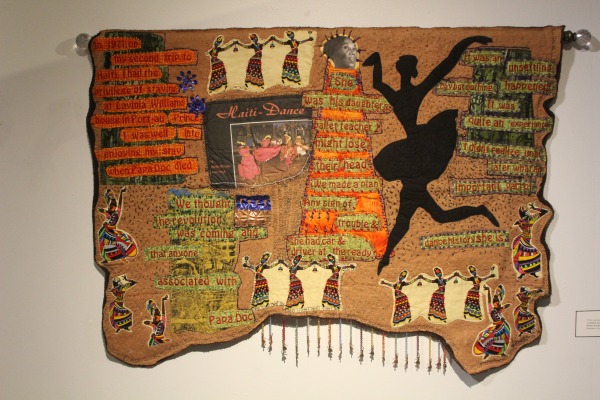 SPRINGFIELD – The new show at Art for the Soul Gallery in Tower Square may be seen by some as a collection of two opposite approaches to art, but the two artists and longtime friends, Dindga McCannon and Frank Frazier, believe their art compliments one another.

“Collages and Legacies” features their very different work. Frazier’s works are stark illustrations with great dramatic impact that depict scenes from the on-going struggle for civil rights. McCannon works as a collagist in fabric creating elaborate works with a multitude of textures and colors.

The show will be on exhibit through Oct. 19.

Frazier’s drawings are on white paper and he used shoe polish as the ink. One drawing shows people at a counter at a Woolworth’s and is titled, “We Just Want Some Damn Coffee,” while another shows a group of protesters at Selma, AL, confronted by police. The title for that drawing is “John Lewis, You Think You’re Gonna Kick Our Ass?”

Another drawing shows a group of people wearing “Black Lives Matter” shirts facing a line of police in riot garb. Frazier said the drawing is designs to solicit comment. “You have to decide who’s the agitator,” he said.

As stark as Frazier’s work is, McCannon’s collages are an explosion of colors and textures. Frazier said of her work, “She’s talking about family, where we’re going.”

McCannon, who is from Philadelphia, PA, is no stranger to Springfield as she has exhibited her work at the Springfield Technical Community College in the past.

“Between the two of us we have 100 years in the arts and black arts,” McCannon said.

Also at the exhibit is the work of Seidah Williams, Frazier’s granddaughter, Her acrylic painting on canvas feature symbols and words that evoke positive affirmations.