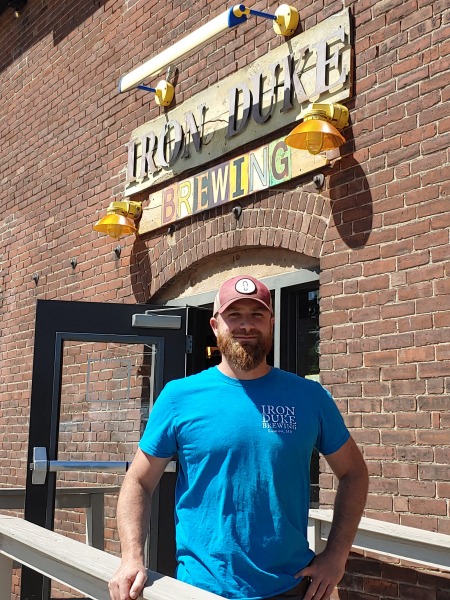 Iron Duke Brewing Company owner Nick Morin stands in front of the entrance of the brewery at the Ludlow Mills.
Reminder Publishing photo by Chris Maza

LUDLOW – Change is in the wind at Iron Duke Brewing Company.

The biggest change of all, however, is the fact that they won’t be changing addresses.

After years of conflict and litigation with WestMass Development Corp., the brewery’s landlord at the Ludlow Mills, and extensive planning on a move to Wilbraham, Iron Duke is staying at Stockhouse 122 where it all started.

It’s a happy development for Iron Duke and WestMass, who had been embroiled in a messy legal battle over the terms of the lease including use of space, entertainment and water metering. Iron Duke took the nonprofit developer to court in 2017 and received an injunction from a superior court judge to prevent their eviction. While still at the Ludlow location, Iron Duke owner and head brewer Nick Morin plotted a move to Wilbraham when the lease at the Ludlow Mills expired. Iron Duke purchasing a building on Cottage Ave. and had gained town approval to begin operations.

But leadership turnover at WestMass, sparked by the sudden passing of former CEO Eric Nelson, led a renewed dialogue and negotiations between the two sides. New CEO Jeff Daley has been a willing and responsive partner, according to Morin.

“It’s almost like an alternate reality,” Morin said. “Now we have a really good back and forth going. Anything they need, we are happy to provide and anytime we need something, they are responsive and they are here right away to work with us.”

With a long-term lease now in place, Iron Duke is moving ahead with a massive undertaking to drastically increase its footprint and capacity at their mill building along the Chicopee River.

“It’s like we are finally getting to do everything we wanted to do,” Morin said. “It’s pretty exciting.”

Iron Duke has already gained access to the other half of the building and are in the process of renovating the space, which would double the brewery’s square footage from 3,000 to 6,000. The additional space will initially offer an indoor location in which patrons can enjoy drinks in a sheltered, socially distanced manner as well as a live entertainment venue, eventually it will be built out to accommodate additional beer production.

The crew has been busy building new tables and serving spaces that will allow them to welcome customers comfortably when indoor service is allowed.

Additionally, the brewery is adding a 4,000-square-foot patio space by closing off the right of way in front of the building’s main entrance with the blessing of WestMass. Originally set up as a temporary response to Gov. Charlie Baker’s requirements under the state’s phased reopening plan, Morin said the plan is to make the patio a permanent fixture. Along with a cement patio space, a two-tiered mezzanine seating structure, originally planned for the Wilbraham location, will also be added with access from the taproom, giving visitors a place to sit with a view of the river.

Morin said he had approval to open the patio and hoped to have it open to the public next weekend.

While the brewery has regularly welcomed food trucks, as part of the expansion, it purchased its own with the intent of providing its own food. Morin said the company has been poring through cookbooks to determine the direction of the menu.

WestMass has also been receptive to the concept of additional expansion to other stockhouses in the complex, Morin noted. The Wilbraham space is currently being used for storage and the industrial space could eventually be leased out to other companies.

Not all signs of change are positive, however. Along with all of the growth, Iron Duke is going to have to go by a new name. Morin explained the brewery received a cease and desist letter from Duke University while attempting to trademark the Iron Duke logo for merchandise.

“Duke is one of several large universities that is very aggressive in defending their trademarks. We don’t see any overlaps in usage and the origins of our name is completely unrelated, but when you are up against something like Duke with the resources they have, we decided it was something we didn’t want to take on. The litigation with WestMass literally set us back years,,” Morin explained. “We’re not the only small business that has been affected like this, but that doesn’t make it any easier. The name means a lot to us and represents the work and everything we’ve done that we’re really proud of.”

While disappointed, Morin said he is trying to maintain a positive perspective. A new name has yet to be chosen.

“My wife joked with me, ‘Well, with everything else changing, might as well change the name,” Morin said with a smile. “We have some ideas, but we really want to choose something that has real meaning for all of us.”

Wonderful news. So many changes.  Good luck with a Patio , food truck and name change.

How about calling it iron brewery?

How about calling it iron brewery?

Can't use Riverwalk Brewery because there already is one in Newburyport. For a new name how about Iron Will. The owners have been through a lot and certainly have one!

wrote on 7/6/2020 at 7:03:53 PMHello viewers, I'm here to shear my testimony on how Dr.Azu cured my herpes virus/hpv with his herbal medicine.I do not have much to say but with all my life i will for ever be grateful to him and God Almighty for using Dr.Azu to reach when me i thought it was all over, today i am happy with my life again after the medical doctor have confirmed my HERPES SIMPLEX VIRUS / HPV of 3 years is gone,i have never in my life believed that HERPES SIMPLEX VIRUS could be cured by herbal medicine. so i want to use this means to reach other persons who have this disease by testifying the power of  Dr.Azu that all hope is not lost yet, try and contact him by any means for any kind of disease. Thanks once again Dr.Azu for your marvelous work may God continue to bless you. You can also reach him today via email: dr.azuherbalhome@gmail.com or +2347087313747,.,..

wrote on 7/7/2020 at 2:37:19 AMIt's so Amazing that i'm totally free from (HERPES) virus disease. I wanna say a very big thank you to Dr.Azu for curing me with his herbal medicine. I have being with this deadly disease called HERPES for the past 3 good years now and there was no solution, i tried so many ways to get cured but it was never easy for me, on till this faithful day i came across this wonderful herbal doctor called Dr.Azu who i now narrated my whole issues to and he told me not to worry that i'm gonna to be fine and normal again, to cut the story short Dr.Azu sent me a herbal medicine through UPS delivery service and instructed me on how to use it, after 21 day of usage Dr.Azu ask me to go for a check up which i did and to my greatest surprise i was tested Negative, i was still not satisfied i told my doctor to carry out the test again and i was still Negative in fact i'm the most happiest person on earth today, God bless Dr.Azu for the marvelous work he's doing out there. Anyone reading this testimony and having similar issues or any other disease you can reach Dr.Azu via email address dr.azuherbalhome@gmail.com or whatsApp his cell number on +2347087313747.

Yet, another reason why dook sucks.

F everything that has to do with that fake, wannabe university.

How about calling it Riverwalk Brewery.

How about calling it Riverwalk Brewery.

I Walk my dog by every day and been seeing the transformation. I am so happy you are staying put. You are always thinking and ready to make adjustments ! It's great that you have your own food truck and it will be available any time ( I hope) my family is so excited about the new look and the fact that you are staying put! Ludlow has a great business in you. I'm glad they allowed you to grow ! Good luck to you. We support you!!! The Zacharewicz family

I Walk my dog by every day and been seeing the transformation. I am so happy you are staying put. You are always thinking and ready to make adjustments ! It's great that you have your own food truck and it will be available any time ( I hope) my family is so excited about the new look and the fact that you are staying put! Ludlow has a great business in you. I'm glad they allowed you to grow ! Good luck to you. We support you!!! The Zacharewicz family

Happy to hear you will be remaining in Ludlow.  You are by far the best beer brewery I know and I can't wait for the expansion. Keep up the hard work, your iron spirits will pay it forward!
Best of luck to your new name. I'm sure it will make just as great of an impact as the Iron Duke sure has!!!

Happy to hear you will be remaining in Ludlow.  You are by far the best beer brewery I know and I can't wait for the expansion. Keep up the hard work, your iron spirits will pay it forward!
Best of luck to your new name. I'm sure it will make just as great of an impact as the Iron Duke sure has!!!

Assuming your logo can continue to be used, how about iron Footprint? People would probably still recognize it even with the name change. Or Iron Foot, or Iron Boot, etc...