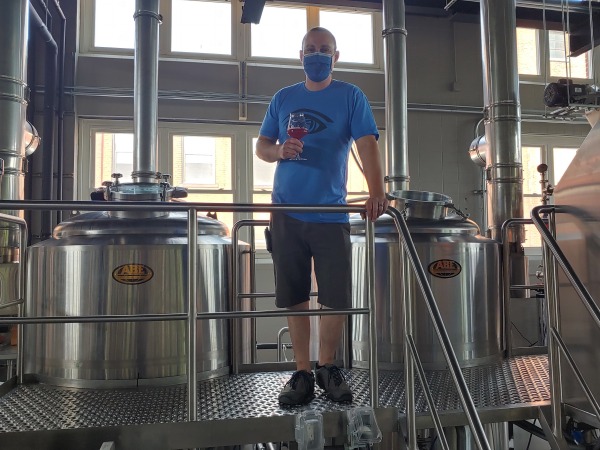 WESTFIELD – A new brewery has become part of the, well, great awakening of the Whip City’s craft beer scene.

Great Awakening Brewing Company launched the first phase of its introduction to Westfield with its first round of can sales at its facility at the Mill at Crane Pond on July 25.

Co-founders Mark Netzer and Andy Grenier, Westfield natives and best friends, said they were excited to be a part of the continuing growth in appreciation of craft beer and add to that experience. That, the explained, was the inspiration behind their name.

“There are still a lot of people out there that don’t understand the craft beer experience. We chose the name to represent awakening the senses to all that craft beer has to offer, and to awaken the community about the variety and different flavor profiles of a true craft beer experience,” Netzer, the company’s head brewer said.

Netzer has been home brewing for more than 10 years and the two have been familiar faces at area beer events for some time.

While for the time being Great Awakening is limited to conducting can sales through an online advance order and curbside pick-up process, Netzer and Grenier have big plans for their 12,000-square-foot space, that includes a seven barrel brewhouse and a massive taproom with 16 tap lines and 150 windows providing natural light and a view of the Little River Dam. The two have been building out the space for more than a year.

“We wanted to start by opening with our spacious taproom, but decided given the current enviornment it’s best to begin by canning our craft beer and getting it into the local community,” Grenier said.

COVID-19 restrictions regarding pouring establishments prompted them to add a kitchen and they anticipate opening in late summer this year.

“Once we found our space at the Mill at Crane Pond, we spent the next year remodeling the space and outfitting it into a brewery. To align with COVID guidelines and trends, we pivoted our business model to kick-off with craft beer van sales by purcasing a semi-automated canning line,” Grenier said. “Shifting to can sales gets our craft beer out to the local community while we built out our kitchen, which is required to open our taproom in accordance with Phase 3 opening guidelines. An unexpected silver lining to COVID, the industry pause gave us time to fill a few oak barrels for aging craft beer, including a huge 130-gallon sherry barrel that we’re already excited about the flavor profile the beer is developing in there.”

In its first run of can sales, Great Awakening offered four beers – an IPA, a double IPA, a sour blonde ale and an imperial stout – and Netzer said they will continue to provide a diverse range of options. At full capacity, the brewery will churn out approximately 25,000 gallons of beer for barrel aging, can sales and eventually in-house pours.

“Westfield is becoming a craft beer destination and we want to help it get there. Residents of Westfield and nearby towns love trying new and exciting brews,” Netzer said. “Westfield is also close to the new Springfield casino, and the nearby I-91 and I-90 highways bring travelers and craft beer lovers from Massachusetts, Connecticut, Vermont, and New York.”