What I’m watching: a historical fantasy on post-war film biz 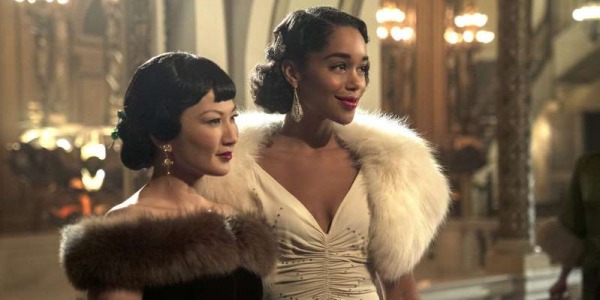 Micelle Krusiec as Anna Mae Wong and Laura Harrier as Camille are two of the stars of “Hollywood.”
Reminder Publishing submitted photo

I’ve finished the new Netflix series “Hollywood” and I have to say that it is to film history what “Inglorious Basterds” is to the history of World War II.

Both productions use actual people and events from history and then re-write it into a wish-fulfillment fantasy. I remember thinking the Tarantino film was a variation of a dream shared by many American kids during the war.

My principal concern about reaction to this show is whether or not people will think it reflects the reality of the film business at the time it depicts.

No, it does not. The real post-war Hollywood was a time of relative calm that was shattered by a Supreme Court decision in 1949 that rocked the studios’ business model, as well as the rise of television in the early 1950s.

Set in 1946 or 1947, the miniseries tells the story of a movie studio headed up by a Harry Cohn-style mogul played by Rob Reiner. Cohn was the head of Columbia Pictures and was known as a manipulative and crude guy.

When the character has a serious heart attack, his wife Avis (Patti Lupone) takes over the studio and approves the production of a film that would tell the story of Peg Entwistle, a real actress who committed suicide in 1932 by jumping off of the famed Hollywood sign when most of her footage was cut from the film “Thirteen Women” that could have advanced her career.

The mini-series is about the creation of that film. The characters include Archie, an African-American screen writer, (Jeremy Pope) who is trying to break into the business; the director Raymond (Darren Criss), who is looking for his first film; his girlfriend, Camille (Laura Harrier), an African-American actress, who is ultimately cast in the lead role; Jack, a first-time actor looking for his break (David Corenswet); Rock Hudson (Jake Picking), a new arrival to Hollywood who is managed by the manipulative agent Henry Willson (Jim Parsons); and Ernie West (Dylan McDermott), a character based on Scotty Bowers, who ran a sex trade for both gay and straight clients out of a gas station for years.

And that’s just some of the characters.

Creators Ian Brennan and Ryan Murphy (both known for “Glee” and other productions) present a multi-level story that addresses the historic homophobia and racism in the real film industry of that era. To do so, rather than present real stories about how black performers were relegated to a handful of roles and that gay people had to be extremely closeted, they elected to present a “what if” story.

What if in 1946, a major studio cast a black actress in a role what involved an interracial romance? What if creative people in the industry could be openly true to their sexuality? What if one studio made a single hit movie that started to change the tide of public opinion and race and sexual orientation?

In the post-war era, there were films that challenged the status quo. Gregory Peck starred in “Gentleman’s Agreement” in 1947 that explored anti-Semitism. Dorothy Dandridge started her Hollywood career as an actress in “Bright Road” in 1953, becoming the person many people viewed as the first African-American movie star. “Pinky” in 1949 starred the white actress Jeanne Crane as a light-skinned black woman who could “pass” as white. Blues Singer and actress Ethel Waters played her grandmother who raised her.

Hollywood was changing at this time, as was the country. It was too slow and not enough, though, but I wonder if these real films and others inspired the series creators to set their production at this time. Remember, many states had laws on their books prohibiting marriages and relationships between people of different races. It was illegal to love someone who was not the same race as you. Being homosexual was also a crime everywhere.

While there are actual films that show slight progress addressing racism, there is no historic record of studios celebrating sexual diversity. Historically, especially in Pre-Code Hollywood films (1929 to 1934), there are gay characters but there are usually used for some sort of comic relief. Once the Production Code was in place, a filmmaker could not use these kinds of stereotypes without running the risk of not seeing his or her film blocked from release.

“Hollywood” doesn’t mince words about gay sexuality and shows a range of gay lifestyles. Archie and Rock are in a loving, monogamous relationship. Willson uses his power as an agent to coerce sex from his clients. He is seen as a predator and perhaps self-loathing at times. Ernie believes his prostitution business is a reaction to the hypocrisy of the industry and he supports gay people. Ace Studios production head Dick Samuels (Joe Matello) is a deeply closeted man, which clearly is torture to him.

There is a sort of true sadness generated by the depiction of real movie star Rock Hudson in this series. In the series, he is out. In real life, Hudson went to his death never admitting his sexuality.

The production values are impressive in this show and the performances are often moving. I think some people will be shocked seeing Parsons in a role so far removed from his Sheldon Cooper from “The Big Bang Theory,” especially when he barks orders to his clients. By the way, the real life Willson was just as nasty.

Sometimes the little details in the film that are wrong bothered me, such as having Ernest Borgnine being a presenter at the Oscars. Borgnine didn’t make his first film until 1951 and wasn’t a star until “Marty” in 1955. The repetition of the rumor that Hattie McDaniel and Tallulah Bankhead were lovers is old Hollywood gossip, which apparently has never been confirmed. It is an unnecessary diversion from the storyline in the series involving McDaniel.

The part of the production recounting how Chinese-American Actress Anna Mae Wong – who is also among the “true” characters in the series – lost a lead role in “The Good Earth” to the white actress Luise Rainer was more or less accurate and is truly heart breaking.

Ultimately, I’m still not sure how much I actually liked “Hollywood,” as the real stories about that era are more compelling to me.

Perhaps the success of the show will convince people to actually watch classic studio films, something that is missing from the major streaming services. Perhaps it will open a discussion about that era in film and how far – or not – we’ve come in terms of racism and homophobia. Either result would be a good one.