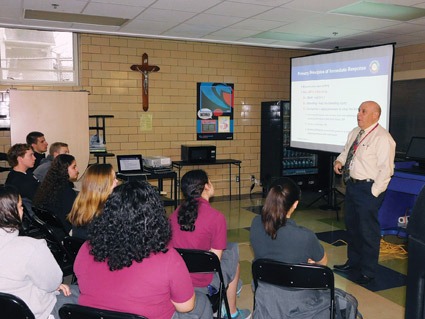 CHICOPEE – April 10 started with a dose of reality for sophomore Alannah Brunt and her classmates in Leslie Perreault’s Health and Wellness class at Pope Francis High School, as they became the first high school students in western Massachusetts trained to “Stop the Bleed.”

When training buddy Julia Maciaszek tightened the practice tourniquet around Brunt’s bicep, she reacted with surprise at the level of pain the life-saving treatment entailed.

But the pain of a properly applied tourniquet was just one of the lessons these students learned as they rushed to pack gauze into simulated puncture and knife wounds on practice devices, working to apply pressure to the packings until their arms shook with the effort.

“As quick as you can, every minute you are losing another liter of blood and [they] have only five,” Dr. Ronald Gross, chief of trauma surgery, Baystate Medical Center, urged Elizabeth Commission as she rushed to pack a simulated wound.

Taught by Gross and a team of Baystate nurses and area paramedics, “Stop the Bleed” used these hands-on experiences – plus simplified “A-B-C” instructions and graphic images on a PowerPoint lecture – to teach these 34 teens how to recognize and respond to life-threatening wounds in an emergency.

Gross, who has also served as a front-line trauma surgeon in Iraq, told students the world we live in today – one that unfortunately has included bombings and mass shootings in addition to everyday situations such as vehicle crashes and at-home accidents – makes this type of training important for everyone, not just emergency responders.

“In the Las Vegas mass shooting [on Oct. 1, 2017], there were at least six people who said they were able to save lives because they had taken “Stop the Bleed,” he said.

Adding that an adult can bleed to death from a serious wound in four to five minutes, Gross told the teens, “With the right training each one of you can be a life saver.”

Gross began the training by empasizing that the first steps in any emergency situation are always to call 911 and insure your own safety. He then gave them a 30-minute multi-media overview of how to identify severe bleeding, the types of wounds students might encounter and which techniques work best on limb and body wounds, depending on wound location and type.

Saying “this is not time for modesty, use what you need to,” Gross told students to take off clothing to pack a wound if necessary, or rip off a sleeve or pant leg to fashion a tourniquet. Belts, he said, do not make good tourniquets because they can’t be tightened sufficiently.

“If the only thing you have is a shirt, use it. People are dying, they don’t care what you are wearing,” he said.

He also told students to warn trauma sufferers that they were gong to hurt them when applying a tourniquet.

Tell them, ‘I’m going to hurt you bad,’ then tell them again,” he said, demonstrating how to apply a tourniquet on the arm of student Dhara Rosario. Once the tourniquet or packing and pressure have been applied to the wound, Gross told students to leave it in place  – or in the case of pressure continue to apply it – until trained responders arrive. Checking to see if the bleeding has stopped can compound the problem by loosening any clotting that has formed.

“Once you’ve started, you are married to that person” until help arrives, he emphasized. And in situations with multiple wounded people, he told students to remember they have two hands and two knees.

“You can take care of three people,” he said. “I have knelt on one wound and put pressure on another,” he said, adding it is OK to drag bleeding victims together so you can work on several simultaneously.

Following the hands-on simulation segment, several students expressed appreciation for the training they had received.

“This is definitely going to be useful,” said Catlyna Alexopoulos. “Something like this could happen to us or someone we know.”

“We’ll be going off to college, and there are so many people there, so many things can go wrong,” she said. “Having these skills can really make a difference in whether or not we can save someone’s life.”

Initiated after the Sandy Hook School shootings in 2012, “Stop the Bleed” grew out of work done by a joint committee of the American College of Surgeons in an effort to increase survival rates from active shooter and international mass casualty events. Meeting in Hartford, CT., the documents that led to “Stop the Bleed” training involved a multi-discipline consensus that included input from the military, National Security Council, Health and Human Services, and the National Association of EMTs. In October 2015, President Barack Obama launched the Stop the Bleed training initiative nationwide.