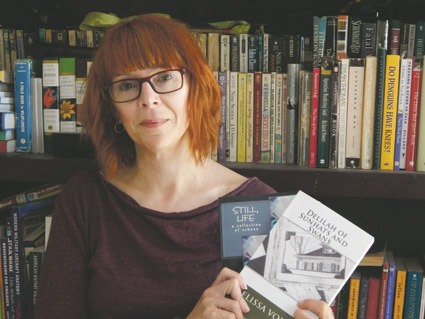 EAST LONGMEADOW – Local author Melissa Volker is set to release a book of short stories about the experiences of people living in New York City.

The collection of 32 stories, entitled “Still Life,”?was compiled over the course of more than a decade and are stylistically similar to vignettes – short impressionistic scenes that focus on moments in a character’s life.

“I started in New York City and these are really inspired by and keyed into the life and my experiences of living there,” she explained. “They don’t all take place in New York City, but it’s sort of the mood and the struggle that I would notice in people trying to survive there, [which] came out in all sorts of different styles.”

Volker said she has a “love-hate relationship” with New York, where she attended New York University and pursued a career in theater for a decade.

“New York has a sense of life and mood and an affect on the people that live there,” she explained. “It’s like an entity of it’s own.”

She continued, “I loved [New York] because it has energy and it’s creative and there’s just passion there; anything goes there, it really is what they say … but it can also crush your spirit. It can also be a horrible friend.”

Volker said a narrator, who is enamored with F. Scott Fitzgerald’s “The Great Gatsby,” is weaved throughout the short story collection.

The themes presented in some of the stories include the end of relationships, moments of epiphany, finding hope, and new beginnings.

“There’s an old woman who has a memory of her childhood and realizes what it means to her in this life,” she explained. “There’s actually a story about an upstairs window in a New York apartment and all the tenants that go through that apartment and it [shows] how they each use that window essentially. Again, it’s really not so much events as experiences in life through all their ups and downs.”

She described her new book as “literary fiction,” which focuses on exploring the human condition.

“Life is loss, love, fear, joy; it’s all of those things and I think that’s what draws me to write,” Volker explained. “It’s not so much that a story comes to me, it’s that an experience pops up and somehow a story evolves out of that experience.”

Sometimes she’ll decide to write a story based on a mood or feeling and will “hear a character knocking,” Volker said.

“They tell me the story and I just write it down,” she jokingly explained.

Volker also has a background in photography, which she believes has also inspired her work, noting, “It’s two sides of the same coin.”

She said the rhythm and cadence of words also plays a role in her writing.

“I will look at a passage and I’ll rewrite it, not because it wasn’t a good passage, it was perfectly evocative … It needs cadence to evoke a certain mood or a certain feeling. The way I string my words together is as important to me as what words I choose,” Volker added.

Her first book, “Delilah of Sunhats and Swans,” which was published in 2010, is about an 18-year-old girl named Delilah who steps off a bus and transforms the lives of residents in the small New England town of Macaenas.

Volker said she is also promoting her first novel ahead of “Still Life’s” release because of a lack of promotion during the novel’s release.

She added she is also working on a fantasy adventure novel with teenage heroine.

Volker is set to appear at Bodacious Books and Baubles’ first anniversary celebration on June 11 and will read a portion of her works and be available for book signings. The bookstore is located at 225 Shaker Road.

Hey all -- quick correction -- there's no reading event at the bookstore anniversary -- I'll just be there to help celebrate along with others! :)