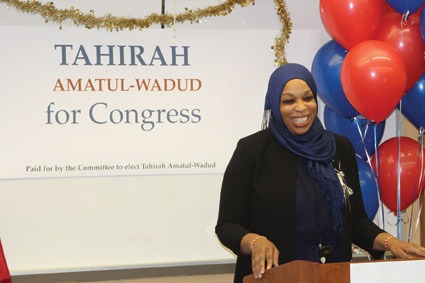 Attorney Tahirah Amatul-Wadud kicked off her campaign in december with an announcement of her intentions at three stops in the First Congressional District culminating with Springfield.
Reminder Publications photo by G. Michael Dobbs

SPRINGFIELD – The conventional political wisdom is that Attorney Tahirah Amatul-Wadud should wait until Congressman Richard Neal decides to retire and not seek another term in office. Her challenge will trigger a Democratic primary fight, something that some party regulars would see as inappropriate.

Amatul-Wadud, though, is not about conventional political wisdom. She believes now is the time to try to unite the large First Congressional District.The 3,000 square mile-district includes rural communities in Berkshire and Franklin Counties as well as Springfield, Holyoke and Westfield and towns in Worcester County as well. Despite the diversity of community, Amatul-Wadud believes there are more similarities than differences.

“We have to unite the district as neighbors,” she told Reminder Publications. “The problems are basically the same, the hopes, the fears are the same.”

She asserted that Neal has “dropped the ball.” She has also been critical of the length of his tenure in the seat, which she told people at her Springfield campaign kick-off appearance late last month, doesn’t belong to him, but to the people of the district.

Amatul-Wadud, unlike Neal, is a supporter of the expansion of Medicare, resulting in a single payer healthcare system. Her politics might seem more left of the current Democratic center.

Her website, https://tahirahforcongress.com, details much of her platform, including supporting comprehensive immigration reform, making college debt-free, supporting net neutrality and making high speed broadband available throughout the district and working for environmental justice.

On jobs development in Western Massachusetts, Amatul-Wadud believes that every public policy advance should have a jobs component.

“It’s the universal issue,” she added.

The start for greater job development is strengthening public education and she would push for universal pre-school at the start of a pupil’s education and end with debt-free college.

“We have to address the rates of student loans,” she said. “Black and brown people are disapportionately affected.”

She would also support greater funding to trade schools and recognizes the lack of high speed Internet access affects both urban students who can’t afford it and rural students who have no access at all.

“Without it [high speed Internet access] there are so many things they are not tapping into,” she said.

On health insurance reform, Amatul-Wadud understands the problems the current system creates first-hand. She noted how a family member who had been enrolled into Medicare needed a prescription drug that was not covered at that time. For working class families, she explained, unexpected expenses such as that are difficult to handle.

“It’s a real problem and not a theoretical one,” she said.

Amatul-Wadud said she is aware that taking on an established elected official such as Neal is not easy and requires financial resources. She has started fundraising efforts and “will not be shy” to ask for contributions from outside the area.

“I realize that money is a big deal,” she added.

Initially a resident of Brooklyn, NY, Amatul-Wadud moved to Springfield with her family when she was nine years old. Her father, a schoolteacher and her stay-at-home mom to the family of 10 children, wanted the opportunities a smaller city with a diverse population could offer their family, she explained.

She attended Springfield public schools, the Elms College and then Western New England University School of Law. She has been in her own practice for 11 years, specializing in family law with an office in Chicopee.

Amatul-Wadud is aware that an African-American woman who is Muslim and wears the hijab may cause some assumptions from some potential voters.

She emphasized she is not naïve and said, “I came up in a community where I was the only one like me.” She added that it has been estimated that 60 percent of Americans have never met a Muslim and that she must overcome the bigotry of some people that she said is unfounded.

Amatul-Wadud recalled that during the presidential campaign of John F. Kennedy, there were anti-Catholic sentiments voiced. She believes in the separation of church and state and added, “My view is I never look to impose my religious beliefs on any other person.”

This lady was my kids' attorney. She ignored my history of restraining orders and the fact that 2 kids accused my ex, former Springfield city councillor John Lysak, of sexual assault. One of those accusations resulted in my ex admitting guilt in a court of law. Even with the guilty plea, she refused to stop advocating for my ex to keep custody of my kids. I have no legal custody of my kids, even though I've never neglected or abused them, and I have no criminal record. My ex has had restraining orders against him and pled guilty to sexually assaulting a child under the age of 14. This is unprofessional, and makes her unfit for Congress.

As a colleague, I have been impressed by Attorney Anatul-Wadud’s commitment and professionalism since the day I met her. Her work in a particular case on behalf of an individual does not represent her political stances or qualifications - only advocacy of her client’s wishes and goals in that case. Sounds like she did her job. And if elected, there is no doubt in my mind that she would do an excellent  job advocating for the people of the First District.