Biggest headlines of 2019 for Massachusetts 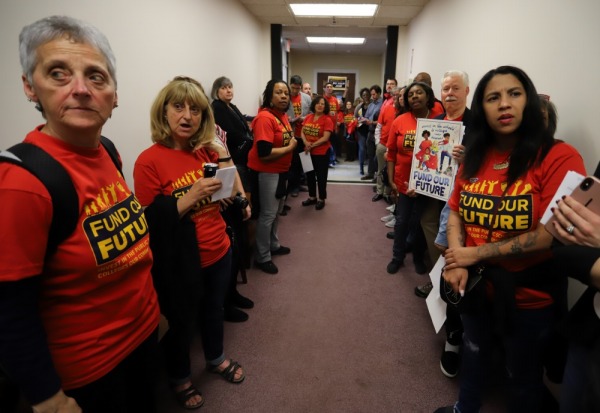 Activists with Fund Our Future lined the corridor outside the office of Rep. Alice Peisch, co-chair of the Education Committee, on May 16 while campaign leaders talked with staff inside. Reminder Publishing photo by Sam Doran/SHNS

BOSTON – The reporters and editors of the State House news Service have identified what they believe are the top stories in Massachusetts for the past year.

You could call it “landmark,” like many a politician did. Generational, or game-changing.

Members of the State House press corps called it the top story of 2019.

However you describe it, it’s been a long-time coming – a year and change in the making, if you count back to the flatlining legislative talks that fizzled at the end of the 2017-2018 legislative session. Four years, if the starting point is the release of the Foundation Budget Review Commission’s report tallying the $1 billion worth of inadequacies in the state’s school funding formula. And if you go all the way back to the original education reform law, then it’s been 26 years.

Beating out transportation frustrations, high-profile electoral matchups and other new legislation, the Number 1 story of the year is the school funding reform bill that became law after a yearslong push and pledged more money for English learners, low-income students, special education and employee health costs.

You know who had a front row seat to one of the year’s biggest stories and yet was quiet as a mouse in 2019? Martha Coakley, the former attorney general and gubernatorial nominee who in April took a job on the government affairs team for e-cigarette giant Juul.

The story that ranked second on the State House press corps’ year-end top 10 list is a true tale of 2019. As of earlier this week, the word “vaping” had appeared in 174 State House News Service articles since 1986 – 144 of those articles (almost 83 percent) were published in 2019 and 101 of them were published since Sept. 1.

Checking in at No. 2 for 2019 is the ubiquity of vaping and Gov. Charlie Baker’s temporary ban on the sale of all vaping products amid a national outbreak of serious illnesses, including three deaths in Massachusetts.

If policymakers are going to find a solution to No. 5 on this year’s list, the subject of No. 3 is going to play a major part – the Red Line train derailment at JFK station.

The good news is that no one was injured in the making of the third biggest story of 2019. The bad news is that for MBTA, it seems that it’s always one step forward, two steps back.

On June 21, Volodymyr Zhukovskyy of West Springfield allegedly crashed his truck into a group of motorcyclists in New Hampshire, killing seven people.

The tragedy did not at first appear to have any governmental implications. In the following weeks, though, it became clear that the Registry of Motor Vehicles had missed warnings from Connecticut that should have resulted in suspension of Zhukovskyy’s commercial license before the crash – and also missed thousands of similar alerts for more than a year.

Registrar Erin Deveney resigned on June 25. Boxes of unprocessed out-of-state notices came to light. Investigations and audits ensued, offering insight into who knew what and when they knew it. A state board that was not conducting its oversight role came back to life and fired its director. And Beacon Hill is still dealing with the fallout from the press corps’ number 4 story of 2019: a Registry of Motor Vehicles in crisis.

Not all of our top 10 stories of the year deal with unexpected twists in state government, newly launched campaigns or the signing of major new laws. Some focus instead on long-simmering issues that have frustrated Beacon Hill for years before reaching a turning point in 2019.

In this case, it’s a “tipping point,” analysts said, that affects economic growth, climate change and more. That assessment could also qualify as a turning point. In 2019, it became clear to more and more people that if you are traveling by car, it will take longer than you thought. Predicting drive times became a joke. Our No. 5 top story of 2019 is everywhere you look at almost every time of day, and here it is right now.

We’re rolling along in our countdown of the biggest stories of 2019, with this installment marking the half-way point.

So perhaps it’s fitting that reporters chose a story about someone who is a political institution in Massachusetts going up against someone whose last name is somewhat synonymous with Massachusetts politics, and about half his age.

It’s acronyms against bilingualism. Green New Deal against a scion of a family born of the New Deal. And perhaps most importantly, it’s Democrat against Democrat (against Democrat).

Rounding out the bottom tier is U.S. Rep. Joseph Kennedy III’s decision to run for the Senate in 2020 and challenge incumbent Democrat Ed Markey, who is seeking to extend what will be a 44-year career in Congress come next November.

And one of the great things about this story is that it’s likely to be back on the list next year, no matter how it ends.

The top stories of 2019 cover big issues, like the $43.3 billion annual state budget, a law affecting anyone who gets behind the wheel of a car, and an unprecedented fine from gaming regulators.

In some cases, the stories are so big that they stretch beyond the state’s borders, over to New Hampshire and Iowa and South Carolina. And they keep on going into 2020.

Massachusetts loves to be number one. State lawmakers gloat endlessly when the state tops a ranking of states, in education or health care or innovation. And lawmakers often crow about how the State House functions more civilly than the federal government, which is not a heavy lift.

But the story that ranked eighth on the State House press corps’ list of the top stories of 2019 is no cause for bragging rights. Rather than a single event, this story built momentum during the course of the year, and mostly reared its head when deadlines were in sight and gave most everyone fits.

Coming in at No. 8 is the ongoing strife between House and Senate Democrats (and, in some cases, the Baker administration) that has led to a pattern of late budgets and contentious negotiations.

9. Beacon Hill to Drivers: Put Your Phones Down

Gov. Charlie Baker’s Nov. 25 signature on an anti-distracted driving law was more than 15 years in the making.

Similar language was first filed in at least 2003. There were warnings both before and after a 2010 law took effect banning texting while driving that the scaled-back measure would be difficult to enforce amidst rising use of cellphones, which in many cases are minicomputers. For several lawmaking sessions in a row, the Senate passed an expanded bill but the House did not, an inversion of the pattern from earlier years.

The tide seemed poised to shift this year when Baker included distracted driving components in a broader road safety bill and both branches passed their own versions of the hands-free proposal by near-unanimous margins.

Then came the unexpected. The legislation stalled in a private conference committee for five months as House and Senate Democrats struggled to find agreement on language aimed at monitoring traffic stops for profiling by law enforcement.

But as the formal lawmaking portion of the year raced to a close, a resolution emerged.

Starting on Feb. 23, 2020 motorists will now face punishments for any use of a cellphone or electronic device behind the wheel. They will only be allowed to make a single tap or swipe to activate hands-free mode, and once fines kick in March 31, those who violate the new law will face fines of between $100 and $500. Repeat offenders could face insurance surcharges and would be required to enroll in a driving course.

Massachusetts became the last state in New England to require hands-free device use behind the wheel.

Under the compromise, anonymized demographic data from traffic stops ending in citations will be published every year, but all stops will only be tracked if a department is found to have engaged in profiling and the raw data itself will remain private. That result did not please all stakeholders. American Civil Liberties Union of Massachusetts Racial Justice Program Director Rahsaan Hall described it as “one step forward, two steps back.”

For families affected by distracted driving crashes, who returned to Beacon Hill time after time to keep the proposal front and center, the law brings some closure after years of advocacy.

At the start of the year, the opening of the state’s marquee casino on the Mystic River was not a sure bet.

Wynn Resorts founder and CEO Steve Wynn had resigned amid allegations of sexual harassment in 2018, but even his divorce from his namesake company was not enough to stop the state investigations into Wynn's conduct and the suitability of Wynn Resorts to continue to hold one of two resort casino licenses in Massachusetts.

Wynn himself filed a lawsuit seeking to block the Gaming Commission’s investigation, and the litigation kept regulators from issuing a report on its findings while Wynn contested the way some information was obtained. Meanwhile, the company's casino in Everett kept rising.

The Gaming Commission held three full days of hearings in April and would ultimately find “significant” and “repetitive” failures in how the company handled the allegations of misconduct against Wynn, but they were not enough for regulators to strip the company of its license.

Instead, the MGC handed down a record $35.5 million fine, and ordered CEO Matt Maddox to undergo executive management training.

In the midst of all that, Wynn Resorts began quietly exploring a sale of the Everett property to MGM, which operates the state’s other casino in Springfield. Those talks, however, ended, and on June 23 the shimmery hotel and casino opened its doors. It was the third and final gaming property licensed in Massachusetts to open, almost fulfilling the vision of policymakers who in 2011 authorized three casinos and one slots parlor.

As 2019 comes to a close, the gaming, shopping and dining attraction just north of Boston has so far not spun off the revenues that expanding gaming supporters envisioned when they passed the casino law in 2011. The casino took in almost $260 million in gross gaming revenue through November, generating just under $65 million in taxes for the state, and executives say they are working to ramp the facility up to “Wynn standards.”